Review: Four Treasures of the Sky by Jenny 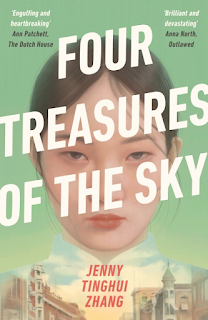 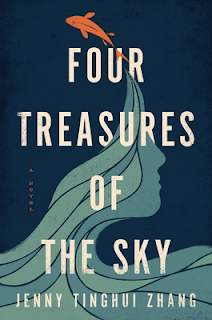 Four Treasures of the Sky by Jenny Tinghui Zhang
Flatiron Books
Publication Date: April 5th/July 28th, 2022
Hardcover. 336 pages.
About Four Treasures of the Sky:
"Daiyu never wanted to be like the tragic heroine for whom she was named, revered for her beauty and cursed with heartbreak. But when she is kidnapped and smuggled across an ocean from China to America, Daiyu must relinquish the home and future she imagined for herself.
Over the years that follow, she is forced to keep reinventing herself to survive. From a calligraphy school, to a San Francisco brothel, to a shop tucked into the Idaho mountains, we follow Daiyu on a desperate quest to outrun the tragedy that chases her.
As anti-Chinese sentiment sweeps across the country in a wave of unimaginable violence, Daiyu must draw on each of the selves she has been - including the ones she most wants to leave behind - in order to finally claim her own name and story.
At once a literary tour de force and a groundbreaking work of historical fiction, Four Treasures of the Sky announces Jenny Tinghui Zhang as an indelible new voice. Steeped in untold history and Chinese folklore, this novel is a spellbinding feat."

(*I included both the UK [left] and US [right] covers because I usually include the cover of the edition I read, which was the UK edition, but I also love the US one so wanted to include it as well!)

Four Treasures of the Sky is a story that hit me much harder than I could have anticipated. This is a tragically beautiful story of historical fiction that I think is a must-read and that I found myself almost unable to put down while I was reading it.

In the beginning of the story, Daiyu tells of how her name is taken from a mythical story of a girl named Daiyu whose fate ends in tragedy. Daiyu is determined not to let her name determine her own fate, and tries her best to avoid it–even though life seems to be doing anything it can to thwart this by throwing obstacle after obstacle into her path. We follow Daiyu over the course of her life, from her struggles in China to her kidnapping to California and eventual escape to Idaho. We meet the many different characters she meets, from the good to the bad to everything in between, and we unfortunately see many different acts of devastation and loss, as well as moments of hope and accomplishment.

This is one of those books where the protagonist is hit with so much adversity at almost every step of the way that you almost start to wonder how they are able to stay filled with some level of optimism and desire for a better future. But this is how Daiyu shines and acts as an incredible symbol of inspiration and hope that you can take control of your own life and make of it what you can. Zhang's writing allowed me to feel like I was with Daiyu every step of the way, doing my best to understand everything she endured and ceaselessly rooting for her.

Zhang's writing is stunning and flows almost effortlessly. This is one of those books that does not usual quotations marks for dialogue, so if that is something that bothers you it might be worth knowing going into it. I don't mind this style and thought it worked really well for the story. I liked how Zhang would interweave occasional tales from myth and incorporated a sense of magic at times into the story.

Four Treasures of the Sky also shows the treatment of Chinese people in America in the nineteenth century and during the time of the Chinese Exclusion Act. I think that many people may be generally aware of the discrimination and hatred that was displayed towards the Chinese, but I agree with the author's note that much of the details and long-lasting effects are not often taught enough or are not observed as much as other aspects of America's history. I really liked how well this book showcased this period of time and how truly horrifying it was for Chinese people in America. I also appreciated that the author included a great list of books for reference in the author's note for further information into this history, and I intend to look up some of those books now to read more.

There are a lot of themes explored in Four Treasures of the Sky, from overcoming obstacles and learning one's strengths to trying to stay true to yourself and doing what's right. But the theme that stuck out the most to me was that of agency, and especially agency in relation to being haunted by our names or something "predetermined" or already chosen by our past. I think it's easy to overlook how much influence passive choices and acceptance can affect our lives, and I found it very poignant and compelling to see how Daiyu actively fought against this and refused to let anything else control her life–even when she was constantly forced to do things against her will. For Daiyu, it was more than just the shadow of her name haunting her throughout life, it was the fact that she was constantly put into positions that left her feeling powerless and lacking any agency in the actions of her own life. Because of this, she took every opportunity she had to develop her own agency and live her life the best she could given the circumstances she was placed into, and this is what I think really resonated the most with me.

Overall, I've given Four Treasures of the Sky five stars. Zhang's prose is absolutely stunning and manages to tell one of the most beautiful and tragic stories I've read in some time. If you are looking for a historical fiction novel that you can really lose yourself in and that has a strong, compelling protagonist and consistent pacing, as well as incredible insights into a very difficult period of time and the struggles that many Chinese faced in America.

Email ThisBlogThis!Share to TwitterShare to FacebookShare to Pinterest
Labels: review, the four treasures of the sky