Review: The Second Sight of Zachary Cloudesly by Sean Lusk 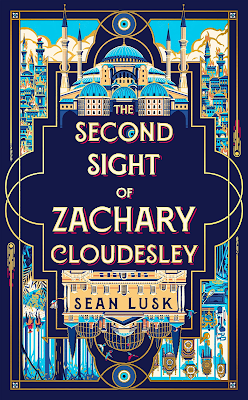 The Second Sight of Zachary Cloudesly
Doubleday
Publication Date: June 9th, 2022
Hardcover. 368 pages.
About The Second Sight of Zachary Cloudesly:
"In 1754, renowned maker of clocks and automata Abel Cloudesley must raise his new-born son Zachary when his wife dies in childbirth.
Growing up amongst the cogs and springs of his father's workshop, Zachary is intensely curious, ferociously intelligent, unwittingly funny and always honest - perhaps too honest. But when a fateful accident leaves six-year-old Zachary nearly blinded, Abel is convinced that the safest place for his son is in the care of his eccentric Aunt Frances and her menagerie of weird and wonderful animals.
So when a precarious job in Constantinople is offered to him, Abel has no reason to say no. A job presented to him by a politician with dubious intentions, Abel leaves his son, his workshop and London behind. The decision will change the course of his life forever.
Since his accident, Zachary is plagued by visions that reveal the hearts and minds of those around him. A gift at times and a curse at others, it is nonetheless these visions that will help him complete a journey that he was always destined to make - to travel across Europe to Constantinople and find out what happened to his father all those years ago."

The Second Sight of Zachary Cloudesly is every bit as delightful and absorbing as it's beautiful cover. I didn't know a lot about this book going into it, and it ended up being one of those books that's written in such a flowing and captivating way that you can't help but find yourself flowing through faster than you could have expected. If you like stories like Robert Dinsdale's The Toymakers, then I think this is the type of story you might also enjoy.

In The Second Sight of Zachary Cloudesly, we follow clockmaker Abel Cloudesly and his son, Zachary; Grace Morley and her daughter, Leonora; and Aunt Frances. I adored all of these characters so much, and I especially loved how strong each character's personality was and how different each one was from one another. The story starts out on a rather sad note when Abel's beautiful wife, Alice, dies in childbirth, leaving Abel alone to care for Zachary. This is how his path intertwines with Grace Morley, who becomes a wet nurse for Abel while she nurses her own daughter, Leonora, and intertwines with Alice's Aunt Frances who wants nothing more than to have Zachary come live with and be raised with her at her estate. Without going into too much depth about the rest of the plot, Abel eventually accepts a job offer in Constantinople after a terrifying event occurred involved his son, and it is this decision that leads to his disappearance and Zachary's eventual quest to Constantinople to find his father.

Although this sounds like a very adventurous plot, it's not quite as action-packed as it might sound. Instead, it's much more of a character study and a story that involves discovering family, exploring family relationships, identity, and so much more. It's incredibly immersive and I found myself completely enraptured by Abel's many different clockwork creations. If I were lucky enough to be alive at the same time that Abel was making his creations, I would save as much money as I possibly could so that I could buy his work because it sounds amazing and I love how much effort and soul was put into making each one.

Abel, Zachary, and Aunt Frances are three very different people with very different passions and ideas of how things should be in life, but I felt as though there strong passions and rather eccentric personalities are also what makes them so similar and form such a strong bond with one another. Aunt Frances is probably the most eccentric with her passionate studies and collection of animals, including her most beloved birds. Zachary is an intensely curious boy who not only excels in his studies but also finds himself able to have visions that can foretell the future and tell him things about people. It's hard for him to relate to other children his own age, and this makes him a bit of a solitary individual at times. Lastly is Abel, who seems like a somewhat introverted figure who prefers spending his time working on his projects and, before her death, doting on his wife. I adored all of these characters and found myself fully connected to them to where I even found their flaws and less positive choices or attributes an important part of them.

Despite the fact that this story feels very fantastic, it is historical fiction and takes place in our own world. Lusk's world-building, however, is still marvelously crafted and it felt as though I were transported back in time to both London and Constantinople. Lusk's descriptions of Constantinople in particular were exceedingly vivid and well-research, accurately capturing the immense diversity and all-around bustling environment that it was in the 18th century. I couldn't get enough of this vibrant world. Lusk's pacing also felt very consistent throughout–never rushing, never too slow, but a nice consistent pace that really values a thoughtful read.

Overall, I've given The Second Sight of Zachary Cloudesly five stars! If you're looking for a story of family, discovery, a little bit of whimsy, and a compelling story, then you really can't go wrong with this one.