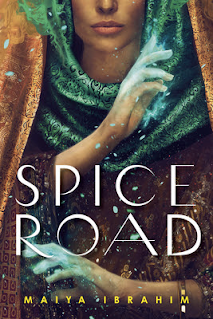 From Goodreads:
"In the hidden desert city of Qalia, secret spice magic awakens affinities in those who drink the misra tea. With an affinity for iron, seventeen-year-old Imani wields a dagger like no other warrior, garnering her the reputation as the next greatest Shield for battling the dangerous djinn, ghouls, and other monsters that lurk in the sands beyond city limits.
Her reputation has been overshadowed, however, by her brother who tarnished the family name after he was discovered stealing their nation's coveted spice - a tell-tale sign of magical obsession. He disappeared soon after, believed to have died beyond the Forbidden Wastes, and leaving Imani reeling with both betrayal and grief.
But when Imani uncovers evidence her brother may be alive and spreading their nation's magic beyond the desert, she strikes a deal with the Council to find him and bring him back to Qalia before he can reveal the city's location. Accompanied by Qayn, a roguish but handsome djinni, and Taha, a powerful beastseer whose magical talents are matched only by his arrogance, they set out on their mission.
Imani will soon discover there are many secrets that lie beyond the Forbidden Wastes - and in her own heart - but will she find her brother before his betrayals endanger the fate of all of Qalia?"
This premise sounds really interesting–I'm really curious about this magic system! Also, this beautiful cover reminds me a lot of Lost Gods by Micah Yongo, which I think is really fun.
and... 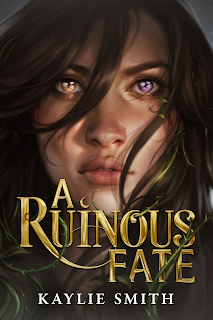 From Goodreads:
"Fate does not choose the weak. Fate chooses the ready.
Calliope Rosewood is a witch with a long streak of bad luck. Like all witches in Illustros, her fate is directly tied to Witch’s Dice—powerful artifacts that have blessed her kind with limitless magic but also set them on a path toward destruction. Cursed with unspeakable powers that terrify even the most dangerous witches and fae, Calla deserted her coven four years ago and has been in hiding with her two best friends since. But Calla is also hiding a grave secret: She is only three Rolls away from becoming the last Blood Warrior and starting the Final War that will decimate her people and eradicate their magic.
After a betrayal from her ex leads her one step closer to fulfilling that age-old prophecy, Calla is desperate to do whatever it takes to reset her fate . . . even if that means journeying into the deadly Neverending Forest with said ex and his enticing, yet enigmatic older brother to find the one being who can help her forge her own path. As Calla ventures farther into the enchanted woods, she finds her heart torn between her past desires and the alluring new possibilities of her future and learns that choosing your own destiny may come with deadly consequences."
This sounds like a lot of fun, and even though I don't read all that much YA anymore, I'm certainly thinking this could be an enjoyable one to check out.
What do you think about these upcoming releases? What are your anticipated upcoming releases?
Posted by Jordan @ForeverLostinLiterature at 2:00 AM