Review: The Angel of Rome by Jess Walter 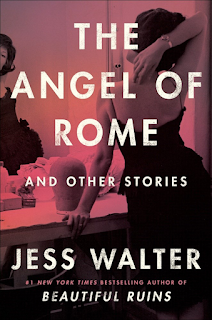 The Angel of Rome by Jess Walter
Harper
Publication Date: June 28th, 2022
Hardcover. 274 pages.
About The Angel of Rome:
"We all live like we're famous now, curating our social media presences, performing our identities, withholding those parts of ourselves we don't want others to see. In this riveting collection of stories from acclaimed author Jess Walter, a teenage girl tries to live up to the image of her beautiful, missing mother. An elderly couple confronts the fiction writer eavesdropping on their conversation. A son must repeatedly come out to his senile father while looking for a place to care for the old man. A famous actor in recovery has a one-night stand with the world's most surprising film critic. And in the romantic title story, a shy twenty-one-year-old studying Latin in Rome during "the year of my reinvention" finds himself face-to-face with the Italian actress of his adolescent dreams.
Funny, poignant, and redemptive, this collection of short fiction offers a dazzling range of voices, backdrops, and situations. With his signature wit and bighearted approach to the darkest parts of humanity, Walter tackles the modern condition with a timeless touch, once again "solidifying his place in the contemporary canon as one of our most gifted builders of fictional worlds" (Esquire)."

I didn't initially plan to review this short story collection, as it was one I picked up on a whim during a sale and hadn't heard of prior to that, but I ended up enjoying it so much that I felt it deserved it's own review (and I guess that's a review in itself!). I really didn't know what to expect from this collection of stories going into it, so I was really surprised by how much I loved many of these stories and how immersed I became in many of them. I listened to the audiobook edition of The Angel of Rome and thought the narration by Edoardo Ballerini and Julia Whelan was absolutely perfect. Each narrator managed to captured the voice of whichever story they were narrating deftly and made each one a captivating experience.

My favorite stories were:

"Mr. Voice": I really enjoyed this take on a blended family and how all of the different familial dynamics played out. The narrative voice of this one features a woman looking back on her childhood with "Mr. Voice" himself, and I appreciated the reflection and insight that was present.

"The Angel of Rome": This story follows a man's time spent in Rome as a student attempting to learn Latin. In Rome, he sort of stumbles into a friendship with an actor, which is also how he meets a famous Italian actress (known as, you guessed it, "the angel of Rome"). He retells his life at this period and how it impacted him, and I loved the ending on this one.

"The Way the World Ends": This felt like a very impactful story centered on the commonality that exists within humanity. It starts out featuring two climate scientists who meet at a bar and end up realizing that they are both competing for the same job as professor at the local university. It's a surprisingly hopeful story that, although covering a slightly future world in which climate is causing more and more problems that many people choose to ignore, includes some very thoughtful insight on how we can look at the world around us. There is also a rather interesting cast of characters that keeps things entertaining.

"Fran's Friend Has Cancer": This is a very short, seemingly random vignette following a conversation between a husband and wife at a restaurant. It has an odd little twist that I loved and that added so much discussion-worthy for me to think about.

Many of the other stories were just as well-written and compelling and each had their own special charm to make them stand out. This was a really stunning collection of stories that touched on so many human emotions, from the comedic to the serious, and I would recommend it to anyone looking for something compelling without ever being too heavy.

Overall, I've given The Angel of Rome five stars!