Review: The Ivory Tomb (Rooks and Ruin #3) by Melissa Caruso 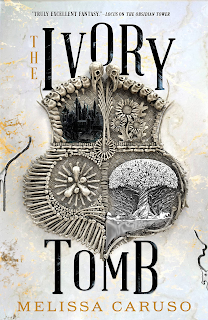 The Ivory Tomb (Rooks and Ruin #3) by Melissa Caruso
Orbit
Publication Date: December 6th, 2022
Paperback. 480 pages.
About The Ivory Tomb:
"The Rooks and Ruin series concludes with this epic fantasy bursting with intrigue and ambition, questioned loyalties, and broken magic as Ryx fights to defeat the demons and save everything she loves.
The Dark Days have returned. The Demon of Carnage mercilessly cuts through villagers and armies. The Demon of Corruption rots the land. The Serene Empire and the Witch Lords race towards war. And in the middle of it all stands Rxyander, the Warden of Gloamingard.
Burdened by conflicting loyalties and guilt, Ryx searches desperately for a way to defeat the demons before the world she loves is completely destroyed. To find answers, she’ll have to return to where it all started…the black tower at the heart of Gloamingard.
By blood the Door was opened and only by blood will the Dark Days end."

Please note that while I will avoid any spoilers from The Ivory Tomb, there may be some minor spoilers for the first two books in the series in this review.

The Ivory Tomb is the last and final installment in the Rooks and Ruin trilogy from Melissa Caruso. I have enjoyed this trilogy immensely and absolutely adore this world and characters. The Ivory Tomb was an incredible finale and I am both devastated that it's over and all also extremely satisfied with this ending.

The Ivory Tomb picks up pretty soon after the events of The Quicksilver Court, which basically means there is chaos everywhere. All of the demons have been released from Hell and it's going pretty much as badly as you might expect. Ryx, Severin and the rest of the Rookery have undertaken the task of trying to get the demons back under control and sent back to Hell, but it's proving even harder than they could have expected, especially when Corruption, Carnage, and Hunger are wreaking havoc and terror upon the lands. And not only are Ryx, Severin, and the Rookery battling the demons, they are also battling those who should be on their side to send the demons back because of a recent discovery about Ryx that has some people on edge.

This book was essentially nonstop action from page one that never let up, and I actually loved it. I'm always a little worried that my memory will be lacking when I read books in a series more than a couple months apart, but because Caruso throws you right back into this world and with these characters, it's easy to get sucked right back into this world and remember almost everything that happened prior to the events of The Ivory Tomb. I was immediately reminded why I love Ryx, Severin, Foxglove, Bastian, Kessa, and Ashe so much and how they work so well together as both friends and people thrown together by circumstances they never expected and now must work together in extreme situations, which they always do exceptionally well.

As always, there is some fantastic political intrigue at play in this book, especially in regard to the potential wars brewing as a result of the current chaos caused by the demons being free. I really enjoy seeing how all of the different factions and areas interact with one another and have all of their own problems that lead to tons of insults and very precarious balances that must be held. The magic systems also play into the politics very heavily due how they are used and their implications on the world around them. I love how much is used in this series and the different ways it can be used. The Witch Lords are probably the most fascinating to me due to their connection to the land in their domain, and it's these strong ties that contribute to so much of the tension and conflict in this world, along with many other aspects.

I think one thing I love about this series and this book in particular is how Caruso doesn't really throw in any unnecessary drama or conflict just to drag things out or add unneeded tension. For instance, there's a small romantic interest going on with Ryx and another character, but it's truly a very background concern in this series and never seems to override the overarching plot. In The Ivory Tomb, there are so many instance where Caruso could have turned a spotlight onto the romance and forced Ryx to do make questionable decisions based on her feelings, but she instead focuses more on the responsibilities that Ryx has as a warden of Gloamingard and to the world itself and getting the demons back under control, and I really appreciated that. The stakes feel so much more realistic and terrifying when the main focus stays on the big terrible things happening and not characters getting caught up in slightly less important (relatively) personal situations.

That being said, that's not to say that Caruso doesn't focus on the interpersonal relationships and chemistry between her characters, because she definitely does to an excellent degree. The dialogue and banter that all these characters have with one another are part of what makes this such a genuinely enjoyable story, and I loved the sense of comic relief I'd get when the characters were sarcastic or making in-jokes during intense moments. I also loved watching the process and culmination of Ryx and Severin's growth with one another in this book and seeing how they have slowly begun to trust one another and develop better understanding about each other's pasts and views.

Overall, I've given The Ivory Tomb five stars! If you haven't started the Rooks and Ruin trilogy or read Melissa Caruso's Sword and Fire trilogy, then I'm sorry to say that you are definitely missing out. I can't recommend these books enough: amazing, endearing characters, political intrigue, vibrant world-building, and some fascinating magic systems.

*I received a copy of The Ivory Tomb courtesy of the publisher in exchange for an honest review.*