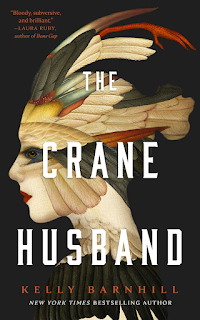 From Goodreads:
"'Mothers fly away like migrating birds. This is why farmers have daughters.'

A fifteen-year-old teenager is the backbone of her small Midwestern family, budgeting the household finances and raising her younger brother while her mom, a talented artist, weaves beautiful tapestries. For six years, it’s been just the three of them—her mom has brought home guests at times, but none have ever stayed.

Yet when her mom brings home a six-foot tall crane with a menacing air, the girl is powerless to prevent her mom letting the intruder into her heart, and her children’s lives. Utterly enchanted and numb to his sharp edges, her mom abandons the world around her to weave the masterpiece the crane demands.

In this stunning contemporary retelling of “The Crane Wife” by the Newbery Medal-winning author of The Girl Who Drank the Moon, one fiercely pragmatic teen forced to grow up faster than was fair will do whatever it takes to protect her family—and change the story."

This sounds so odd in all the best ways! 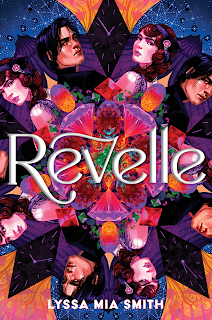 From Goodreads:
"Inspired by Moulin Rouge! and set on an island in a magical version of Prohibition-era New York, Revelle is a breathtaking YA stand-alone fantasy full of dazzling magic, romance, and mystery from debut author Lyssa Mia Smith.

On the island of Charmant, magic flows like bootlegged champagne, and fantasies can be bought for the price of a gemstone.

Luxe Revelle, star of her family’s fantastical show, knows the splendor is just an illusion. With Prohibition threatening their livelihood, her family struggles to make a living, watering down champagne and patching holes in their sequined costumes. So when the son of Charmant’s wealthiest family makes her an offer—everything the Revelles need to stay in business, in exchange for posing as his girl and helping him become mayor—she can’t refuse.

The moment Jamison Port sets foot in Charmant, he can’t shake the feeling of familiarity. An orphan with as few memories as gemstones, he’s desperate to learn what happened to his parents. But as he delves into the island’s secrets, he risks angering the wrong person and discovering a truth that just might break his heart.

When Luxe and Jamison accidentally meet, the sparks that fly are more than her magical enchantments. But keeping secrets from powerful people is a dangerous game . . . one that could destroy them both."

This sounds wonderfully magical and I am probably most excited about this setting. Also, how fun is that cover? 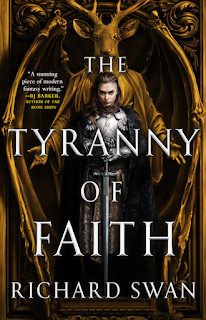 From Goodreads:
"A Justice’s work is never done.

The Battle of Galen’s Vale is over, but the war for the Empire’s future has just begun. Concerned by rumous that the Magistratum’s authority is waning, Sir Konrad Vonvalt returns to Sova to find the capital city gripped by intrigue and whispers of rebellion. In the Senate, patricians speak openly against the Emperor, while fanatics preach holy vengeance on the streets.

Yet facing down these threats to the throne will have to wait, for the Emperor’s grandson has been kidnapped - and Vonvalt is charged with rescuing the missing prince. His quest will lead him – and his allies Helena, Bressinger and Sir Radomir – to the southern frontier, where they will once again face the puritanical fury of Bartholomew Claver and his templar knights – and a dark power far more terrifying than they could have imagined."

I was a big fan of the first book in this series, The Justice of Kings, and I've been really excited to find out where Swan will take the direction of this story.
Posted by Jordan @ForeverLostinLiterature at 2:00 AM