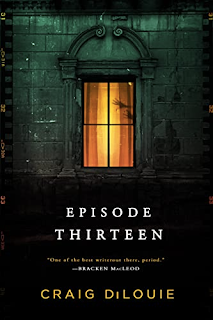 Episode Thirteen by Craig DiLouie
Redhook
Publication Date: January 24th, 2023
Paperback. 464 pages.
About Episode Thirteen:
"Fade to Black is the newest hit ghost hunting reality TV show. It’s led by husband and wife team Matt and Claire Kirklin and features a dedicated crew of ghost-hunting experts.
Episode Thirteen takes them to Matt's holy grail: the Paranormal Research Foundation. This crumbling, derelict mansion holds secrets and clues about the bizarre experiments that took place there in the 1970s. It's also, undoubtedly, haunted, and Matt hopes to use their scientific techniques and high tech gear to prove it.
But, as the house begins to slowly reveal itself to them, proof of an afterlife might not be everything Matt dreamed of.
A story told in broken pieces, in tapes, journals, correspondence, and research files, this is the story of Episode Thirteen — and how everything went horribly wrong."
Episode Thirteen is a mixed media horror novel featuring one of my favorite tropes: a classically haunted house that is about to be investigated. The Foundation House is one of the most notorious haunted houses in the country, and Matt and the rest of his ghost hunting TV show crew are excited at this new opportunity to spend time exploring the hauntings–and hopefully make some groundbreaking discoveries in the process.
I've only read a handful of DiLouie's books at this point, but a familiar thread I've noticed across the ones I've read is that none of them are ever quite what you expect, and/or they go to some weird places, and Episode Thirteen is no exception to that. This starts off as a very typical haunted house study: a ghost hunting film crew gets the rights to spend some time at a house to investigate paranormal activity (by the way–if you want another book with a similar premise, I'd love to suggest Paul Tremblay's A Head Full of Ghosts for your consideration, but I digress). But once things actually appear to start happening at the house, all bets are off. I can't really tell you anything more specific than that because to do so would be to give away spoilers and completely rob you of your own shock and surprise, but I can say that this book explores some pretty outlandish ideas and delves into some exceptionally unconventional areas. I'm not sure if it was the ending I wanted, but I do know that I thoroughly enjoyed the discoveries and journey to get there.

I know there can be some very mixed feelings about mixed media formats in books, but I tend to really like it as a narrative device and I think DiLouie incorporated the different formats really well. It kept me hooked and made the story read very quickly, which to me heightened some of the suspense. There is a mixture of transcriptions from raw footage, diary entries from each of the characters, some texts and emails, and a few other elements thrown in there. I found the diary entries acted as the "prose chapters" where it felt mostly like reading a diary/first person POV and allowed us to get a closer look at individual characters and their backstories and perspectives on what was happening with the house.

Matt and Claire are a really curious couple. Matt seeks to find paranormal activity and Claire seeks to debunk it, yet somehow this has worked well for them over the years. I enjoyed watching their dynamic and witness the closeness in their relationship while also observe the subtle cracks or changes that were slowly developing in different areas. Matt is one of those characters who just oozes passion and almost makes you feel as excited about everything going on as he is, but I also find it difficult to connect with this mindset because I tend to be far more skeptical than he is. That being said, I appreciated that he didn't always jump to conclusions of paranormal, but rather allowed for plenty of skepticism to be expressed by Claire or others, and it seemed like there was a good amount of self-awareness present among the crew to keep some things from being too over the top.

The rest of the crew–Kevin, Jake, and Jessica–also brought some unique perspectives to the story. Kevin, an ex Philly cop who claims to have had his own supernatural experience in the past, is probably the roughest of the crew and also who I occasionally mixed up with the cameraman, Jake. Although I didn't find Kevin or Jake overly compelling as characters, I did like watching their interactions in this book and how their experiences altered as things in the story took some surprising turns. I really enjoyed Jessica's diary entries and getting to know her on a deeper level. Jessica is an actress and has a lot riding on her maintaining this job and getting home safely. I appreciated her viewpoint and also her very authentic reactions to some of the things that happen. The crew as a whole get far more than they bargained for at Foundation House, and I found it fascinating to watch them slowly fracture at different moments as they attempt to come to grips with things.
Lastly, I wanted to touch on the atmosphere of Episode Thirteen, as I think DiLouie nailed the feeling of a somewhat eerie, haunted setting where you aren't really sure what you're waiting for, but you know you're waiting for something to happen. This isn't a horror that feels consistently terrifying or filled with dread, but there's an ever-present sense of uncertainty that hints at something more, but takes a while to get to something more. There's plenty of levity among the characters, as well as plenty of tension and personal feelings involved that makes this a much more well-rounded story.
Overall, I've given Episode Thirteen four stars! This is a solid haunted house story with some very big surprises lurking in store, which makes for a highly entertaining read.

I received a copy of Episode Thirteen courtesy of the publisher in exchange for an honest review.*