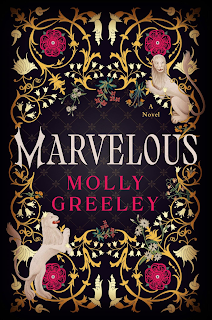 From Goodreads:
"1547: Pedro Gonzales, a young boy living on the island of Tenerife, understands that he is different from the other children in his village. He is mercilessly ridiculed for the hair covering his body from head to toe. When he is kidnapped off the beach near his home, he finds himself delivered by a slave broker into the dangerous and glamorous world of France’s royal court. There “Monsieur Sauvage,” as he is known, learns French, literature, and sword fighting, becoming an attendant to the French King Henri II and a particular favorite of his queen, the formidable Catherine de’ Medici. Queen Catherine considers herself a collector of unusual people and is fascinated by Pedro… and determined to find him a bride.

Catherine Raffelin is a beautiful seventeen-year-old girl whose merchant father has fallen on hard times and offers up his daughter to Queen Catherine. The queen will pay his debts, and his daughter will marry Monsieur Sauvage.

Catherine meets Pedro for the first time on their wedding day. Barely recovered from the shock of her father’s betrayal, she soon finds herself christened “Madame Sauvage” by the royal courtiers, and must learn to navigate this strange new world, and the unusual man who is now her husband.

A mesmerizing novel set in the French royal court of Catherine de’ Medici during the Renaissance, which recreates the touching and surprising true story behind the Beauty and the Beast legend, from the acclaimed author of The Clergyman’s Wife and The Heiress. Gorgeously written, heartbreaking and hopeful, Marvelous is the portrait of a marriage, the story of a remarkable, resilient family, and an unforgettable reimagining of one of the world’s most beloved fairy tales."

This sounds like such a unique and compelling historical fiction and fantasy retelling and I can't wait to have a chance to check it out myself! 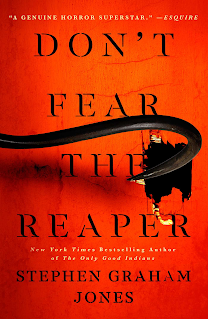 From Goodreads:
"December 12th, 2019, Jade returns to the rural lake town of Proofrock the same day as convicted Indigenous serial killer Dark Mill South escapes into town to complete his revenge killings, in this riveting sequel to My Heart Is a Chainsaw from New York Times bestselling author, Stephen Graham Jones.

Four years after her tumultuous senior year, Jade Daniels is released from prison right before Christmas when her conviction is overturned. But life beyond bars takes a dangerous turn as soon as she returns to Proofrock. Convicted Serial Killer, Dark Mill South, seeking revenge for thirty-eight Dakota men hanged in 1862, escapes from his prison transfer due to a blizzard, just outside of Proofrock, Idaho.

Thirty-six hours and twenty bodies later, on Friday the 13th, it would be over."

Don't Fear the Reaper is the sequel to My Heart is a Chainsaw, which was a brilliant horror novel and homage to slashers. I can't wait for the sequel to see what's in store for Jade. 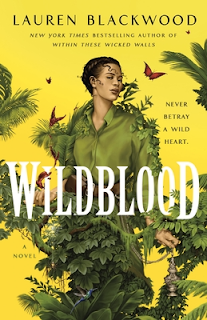 From Goodreads:
"Eighteen-year-old Victoria is a Wildblood. Kidnapped at the age of six and manipulated by the Exotic Lands Touring Company, she’s worked as a tour guide ever since with a team of fellow Wildbloods who take turns using their magic to protect travelers in a Jamaican jungle teeming with ghostly monsters.

When the boss denies Victoria an earned promotion to team leader in favor of Dean, her backstabbing ex, she’s determined to prove herself. Her magic may be the most powerful on the team, but she’s not the image the boss wants to send their new client, Thorn, a renowned goldminer determined to reach an untouched gold supply deep in the jungle.

Thorn is everything Victoria isn't - confident, impossibly kind, and so handsome he leaves her speechless. And when he entrusts the mission to her, kindness turns to mutual respect, turns to affection, turns to love. But the jungle is treacherous, and between hypnotic river spirits, soul-devouring women that shed their skin like snakes, and her ex out for revenge, Victoria has to decide - is promotion at a corrupt company really what she wants?"

Does this not sound so fun and original? I'm honestly way more excited for this than I expected to be, especially given the fact that I don't tend to read too much YA anymore, but... this may need to be another exception!
What do you think of these upcoming releases?
Posted by Jordan @ForeverLostinLiterature at 2:00 AM