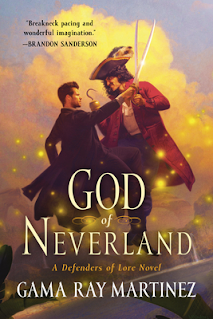 God of Neverland (Defenders of Lore #1) by Gama Ray Martinez
HarperCollins US
Publication Date: April 12th, 2022
Hardcover. 352 pages.
About God of Neverland:
"Peter Pan is missing; Neverland is in trouble. For adults, that might not matter all that much, but for children--whose dreams and imagination draw strength from the wild god's power--the magic we take for granted in the real world is in danger of being lost forever.
Such is the life of a now grown-up Michael Darling.
Michael returned from Neverland with the dream of continuing his adventuring ways by joining the Knights of the Round, an organization built to keep humanity safe from magical and mythological threats. But after a mission gone terribly wrong, he vowed to leave the Knights behind and finally live as a "civilian," finding order and simplicity as a train engineer, the tracks and schedule tables a far cry from the chaos of his youth.
He hasn't entered the narrative in years. So what could the Knights need from him now?
Maponos--or how he's better known, Peter Pan--has gone missing, and Neverland is now on the edge of oblivion. Michael realizes he has no choice and agrees to one last mission. Alongside the young Knight Vanessa and some old friends, Michael embarks on the ultimate adventure: a journey to a fantasy world to save a god. Determined to stop evil, fight for Neverland, and find Maponos, will Michael be able to save the magical and physical world? Or will his biggest fear come true?
The clock is ticking, and in Neverland, that's never a good sign."

As you may or may not know, I'm a big Peter Pan fan, which means I feel the need to read as many different retellings and Peter Pan-inspired stories I can. God of Neverland follows the grown-up Michael Darling as he is pulled back to Neverland to find out why Peter Pan, also known as the god Maponos (an actual Celtic god from myth), has gone missing. To do this, he has to work with the Knights of the Round once again, an organization meant to act as a safeguard for humanity against magical threats–and an organization he once worked for in the past.

What I liked: I liked so many things about this book! From the world-building of Neverland to the immense lore and background that was provided about Neverland, the Knights, and other fantastic elements, I constantly felt like a kid in a candy story with the abundance of rich detail and adventure that the author combined into one cohesive story. I thought Martinez also perfectly captured the childlike, "everything's a game and nothing is that serious," and careless attitude of Peter Pan, and I loved that he included Peter Pan as Maponos, thus incorporating real life Celtic mythology into the mix. I also loved the idea of the Knights of the Round acting as a sort of police force to keep magic and mythical beings from disrupting the lives of humans. I really enjoyed getting to know Michael and understanding his background with both Neverland and the Knights, and I love that we got to see Wendy and her own daughter. If you enjoy retellings that take the source and expand it in all the best ways and add tons of detail and fun new additions, then God of Neverland is a book for you.

What I didn't like: As fun as a lot of the adventure was, sometimes I felt like there was just a bit too much consistent action. It felt like as soon as we neutralized one threat, we were on to another high action scene. While this fits the theme of Peter Pan and Neverland, it was a little tiring as a reader when I wanted to spend a bit more time getting to know the characters or just exploring the lore that has been created. Some of the ways they got out of conflict felt a little too... lucky, at times, as well, but when you're in Neverland I sort of expect that to happen. I also didn't really love or fully understand Vanessa's role in this book, and found myself not connecting with her as much as I did other characters.

Overall, I've given God of Neverland four stars! Also, it seems there is already a sequel with a release date for this spring... and it looks like it'll be set in Wonderland, so I am unbelievably ecstatic to see what this author does with Alice and all the wondrous things in Wonderland.