Girl in the Shadows by Gwenda Bond

**I received a copy of Girl in the Shadows by Gwenda Bond courtesy of NetGalley in exchange for an honest review.** 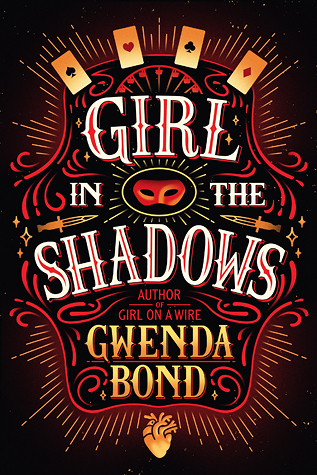 Who doesn't  love a good magic story? I personally love stage magic; there's something absolutely mesmerizing  watching 'magic' before your very eyes. Even though I know that it's all an illusion, I can't help but find myself getting sucked in and riveted to the spot. And as much as I may want to know how the illusion is put on, I almost don't want to know because the feeling of awe is just too enjoyable.

Girl in the Shaows focuses on Moira, a young aspiring magician who runs away from her father (somewhat) and joins the Cirque America, where she hopes to have her own magic show. Once there, she discovers that there may be more to her talents as a magician than she originally thought, and from there we have the basic setup of our story. (Also important to note: this story takes place in a modern day setting, it is not historical.)

First, props to Bond for having Moira be inspired by the many late great female magicians and pay homage to them in many of her magic shows; I felt that was a really great way to tell the stories of these female magicians who often go unnoticed or unremembered in the face of the many great male magicians, such as Henry Houdini and David Copperfield.

Girl in the Shadows was simply a good book. It didn't blow me away, nor was it awful; it was merely a solid, decent read that will certainly entertain, but will not quite rivet you. Throughout a little under 400 pages, Bond introduces a decent-sized cast of characters and a unique world of magic that was quite entertaining to explore. I enjoyed reading about Moira's magic stunts and getting a behind the scenes look at how the Cirque America operated, both of which packed in a lot of substance and intrigue.

Now, moving on the characters themselves. While they were all individually appealing, they were rather one-note and lacking in full development. I didn't fall in love with any one character, and instead I felt sort of 'meh' about all of them. It's not that I have to love every character, but I would at least like to have some level of interest, and unfortunately that interest wasn't quite there. The relationships between most characters made sense, but there were a few that felt a bit forced and strained, like something just wasn't quite right. (I won't say which two people, because, as always, I'd like to keep this free of any spoilers.) Also, while the immediate romantic interest didn't throw me off, I did not enjoy how quickly they went from not liking each to other to being crazy about one another. It was weird. The beginning of the romance made it seem like it would be difficult for the two characters to actually be with one another, but then suddenly they were together and everything was fine. It was a tad confusing and I'm not sure it was handled all that well.


The magic system Bond created was.. interesting? I understood it, yet I didn't. It had rules to it, but I couldn't quite grasp them. The magic was very wild and raw, with very little that made me understand how it was actually used or controlled. Perhaps Bond wanted to create a more vague, uncertain magic system, but if so, it didn't work well for me. I also felt the entire 'magical coin' storyline was slightly head-scratching, but it was an interesting idea nonetheless.


Overall, I am giving Girl in the Shadows three-and-a-half stars for its entertaining storyline and intriguing premise; unfortunately, it lacked enough depth and explanation to knock it up any more stars.

You might also like:
A Fierce and Subtle Poison by Samantha Mabry
Sun Kissed by Coco Nichole
The Book of Speculation by Erika Swyler
The Treading Twisted Lines Story Cycle by Beth Madden
Posted by Jordan @ForeverLostinLiterature at 10:11 AM