Daddy Dearest will be on sale Wednesday, June 1st!

**I received a review copy of Daddy Dearest courtesy of Paul Southern in exchange for an honest review.** 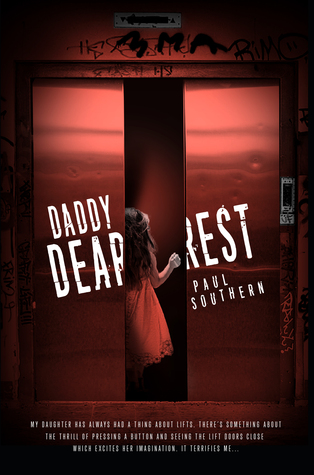 If you like to have your mind messed with a little bit, then settle in and get comfortable, because this is the book for you.

Daddy Dearest tells the story of a man whose daughter disappears one day while traveling alone down an apartment elevator. The entire apartment building is searched, but she is gone and no one has any clue what has happened to her.

To preface, much of the thriller aspect of this book relies on the unknown and the reader being held in suspense, so I'm not going to go too in-depth content-wise so as not to spoil anything. First, it is essential to read Daddy Dearest very carefully so as not to miss anything, because many details are not explicitly stated and instead left to the reader to infer and understand. I'll admit that at first I felt slightly annoyed by this, but as I progressed into the story and became more acquainted with the writing style, it began to become rather enjoyable and actually helped me make sure I was paying close attention.

Southern does an excellent job of creating the main character's narration. The main character, who remains nameless throughout the story, has a very distinctive personality that is both off-putting and intriguing. Our protagonist is brutally honest about his opinions, and he certainly comes off as semi-racist and sexist at times, which accounts for the off-putting part, but somehow Southern creates such an intricately multi-layered character that you find yourself enraptured in his storytelling and continuing to enjoy the character regardless of these offensive characteristics. His honestly is endearing and gains my respect, but it is also because of what he says and does that makes me lose my respect, leaving me with an overall conflicted feeling regarding the protagonist.

The narration appears, at times, to go off onto many tangents. The main characters gets caught up explaining his opinions or experiences about something, leaving the reader to wonder the what the point of these ramblings are, but then it hits you: these 'tangents' are telling extremely important information about the main character and his own actions - they also show how easily distracted he can be. Halfway through the book, I found myself wondering who I was 'rooting' for. This isn't a black and white book with a straight up good and bad character, but instead involves an ever-present grey area that leaves the reader to develop their own ideas and opinions, which I personally found enticing.

Overall, this was a solid thriller for me, and I would certainly recommend it for anyone looking for something a little different from your average thrillers. It's still high-paced, but it's not overtly high-paced, so there is plenty of room to breathe.

You might also like:
Slade House by David Mitchell
The Academy Alignment by David Davis and Andra St. Ivanyi
Black Chalk by Christopher J. Yates
The Watchmaker of Filigree Street by Natasha Pulley

Posted by Jordan @ForeverLostinLiterature at 8:38 AM