The Academy Alignment by David Davis and Andra St. Ivanyi

The Academy Alignment will be released Wednesday, January 17th! 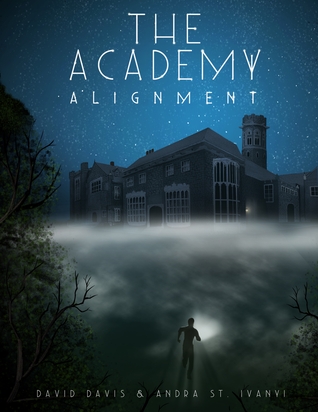 
**I received a copy of The Academy Alignment courtesy of NetGalley in exchange for an honest review.**

Oh, where to start.

I had some issues with this book. When you first start the book, you will be confused. You will wonder in the world you are reading, but hang in there, you'll get to normalcy soon. Eventually the author will bring you into more familiar and somewhat understandable territory and this is when I started to think that this was going to be a fun, unique take on the whole 'mysterious boarding school' genre. In ways, it really was, but in other ways... not so much.

Most reviews that I've perused since I finished seem to be quite positive, stating that the beginning was indeed a bit confusing, but that it eventually worked itself out - which, in ways is true, but not in a very satisfying manner. And some things were still left unexplained. I just felt disoriented. As odd as this may sounds, it is still an entertaining story that can be enjoyed if it's not examined too closely.

First off, I am really not a fan of present narration (this is a peeve that I also mentioned with Legacy of Kings, so at least I'm consistent). I didn't like the number of different of points of view either, as they really just lent to quite a bit more confusion. I felt that Peter, Dr. Linden, and Dr. Browning should have been the max points of view. I understand the use of other characters, but quite frankly it just became a bit too much for a book of its size. If this were a larger, more developed story, then I could understand the multiple POVs more.

In regards to the characters, I felt as though they weren't quite as developed as they could have been, and it was disappointing to see them remain in a somewhat two-dimensional form. When it came to the multiple points of views, it was difficult to distinguish one from another - each rich student seemed to have been molded into the same form. Peter started out as a rather promising character, but I quickly found that his actions just didn't make sense to me. His random photographic memory (what was the point of that?) and great computer skills just seemed to be thrown in to make him look better and conveniently move ahead in the plot. He seemed so indirectly involved in the entire story that I almost could't understand why he was even a part of it.

There's a unique take on the use of/influence of light and dark, which was one area of the book that I actually thought could have been a really interesting concept if it had been developed a bit more (or if we heard about it sooner than the end of the book). Perhaps there will be more in subsequent books, but to be honest i'm not sure if I'll be reading them.

The idea was there, but I just felt like it needed to be expanded so much more. I understand what these people do (leaving it vague so as to have no spoilers), but I didn't fully understand why or how. I kept feeling like I missed a couple pages or chapters. Things also felt a little bit too easy for Peter to decipher or figure out; he struggled, but not that much to find the answers he needed. Things seemed to go from zero to hundred in almost no time, and suddenly the end was there and I couldn't figure out what had really happened.

Overall, I am giving this book two-and-half-stars. Two seems a bit too little, but three seems slightly too generous. I would recommend this for someone who wants a new, unique take on a boarding school story and is interested in taking a chance on a new book.

You might also like:
Black Chalk by Christopher J. Yates
Bradstreet Gate by Robin Kirman
A School for Unusual Girls by Kathleen Baldwin
Posted by Jordan @ForeverLostinLiterature at 8:24 AM