The Outside Lands by Hannah Kohler

Happy Fourth of July to all my fellow Americans (and to those that aren't in America, I still wish you a lovely day)! I had planned to wait and post this review until closer to its release date, but it was the most American-themed book I've read so far this year and I wanted to go a little with the Fourth of July theme, so here we are! 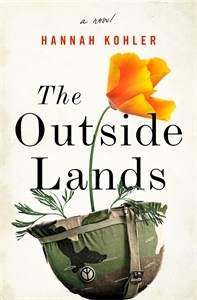 **I received a copy of The Outside Lands courtesy of St. Martin's Press in exchange for an honest review.**


The Outside Lands was wholly unexpected and entirely satisfying in a dark, realistic way. Based upon the brief blurbs I read about The Outside Lands, I had no idea that it would become such a bleak, deeply moving book. Kohler writes with an elegant simplicity that will draw you in and wrap you around this story before you even realize what hit you. If I were sum up this book with one singular word, it would be 'haunting.' This book is like a ghost that quietly seeps into your mind and soul, drags out your emotions, and openly displays the darkness that exists within all of us and the within the world around us.

This is an honest, raw book set during the turbulent years of the Vietnam War. We are given a frank view of the experiences of those deployed along with those stuck back at home, left to wonder and wander aimlessly around, unaware of what is occurring elsewhere. Jeannie and Kip are our two protagonists, siblings who lost their mother in a tragic freak accident at a young age and are still fighting to regain normalcy in their lives. The two still have their father, but they never truly seem to recover from this loss, which is entirely understandable. This is a book where everyone seems to lose themselves, no matter whether they are a main character or a minor supporting one, and it is interesting to see how each copes with their fate. There is much imbalance in the atmosphere as each character struggles to come to grips with the changing times and with who they are.

Jeannie is sort of floating in life. She has a set life with Billy and her young son, Charlie, but she doesn't seem to be a part of this life. There is some piece of her that doesn't quite fit with them, that seems to be yearning for something else - something more. Then she meets Lee, and it seems like this could be just what she needed and was looking for, but again, something isn't quite right. She never quite fits. She wants to be a part of the anti-war movement and a life with Lee, but it's not quite her, and she is too limited in her own life to become any more entrenched in the movement. In the final part of the book, she meets yet another person, and I will not say more than that, and once again it just feels right. But, as history often repeats itself, this can't work either, and she is yet again drawn back to her own life with her husband and child. Jeannie is a relatable character. She is quiet, but she has a subtle strength about her. She is meek and follows the rules around her, but she is not afraid to deviate from her own beliefs and ideas.

Kip is much more bullheaded than Jeannie, but he is still somewhat quiet in his own way, much like Jeannie. Kip is the trouble-maker in the family, always ending up getting into things he shouldn't and acting out. Kip does not wait for a draft and instead enlists himself as a Marine. He is sent off to war where a tragic incident sends him to being accused of a horrific war crime. While Kip and Jeannie differ quite a bit, there are many similarities that can be seen in the way in both are a bit reserved, but both are stubborn and will do what they want.

I was completely taken by surprise by The Outside Lands, as I definitely wasn't expecting this book to affect me or reach me in such a strong way. Overall, I can't help but give it four-and-a-half stars because of its sheer will and ability to tell such a disheartening story in such a simplistic, yet moving way. This is a new Vietnam War-era book that is not to be missed, and Kohler is a new author that is not to be overlooked either.


The Outside Lands will be released Tuesday, August 23rd!


You might also like:
All is Not Forgotten by Wendy Walker
Whistling Women by Kelly Romo
The Dinner by Herman Koch
Anna and the Swallow Man by Gavriel Savit
Smoke by Dan Vyleta
Posted by Jordan @ForeverLostinLiterature at 8:23 AM