For the Most Beautiful: A Novel of the Women of Troy by Emily Hauser


**For the Most Beautiful by Emily Hauser is available Tuesday, January 10th!** 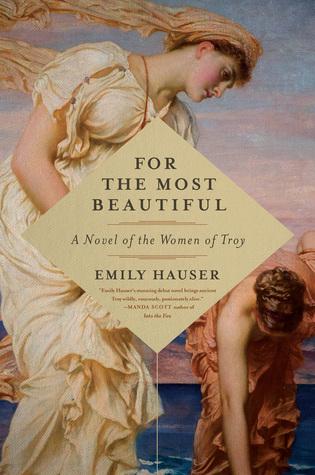 *I received an ARC of For the Most Beautiful courtesy of NetGalley and Pegasus Books in exchange for an honest review.*

There is an extremely large, ever-expanding supply of Trojan War stories and retellings, and though I have read many different versions, I have never read a version told from the perspectives of Krisayis and Briseis. I thought this was a very clever and unique take on a classic tale, so naturally I was eager to discover author Emily Hauser's take. However, what I ended up discovering was not an intense, moving portrayal of the Trojan War, but one that left me wanting more and feeling rather underwhelmed as a result.

For the Most Beautiful was full of ups and downs, which left it feeling like a very average - but still solid - Trojan War tale.

Krisayis and Briseis were good storytellers, but I didn't find myself caring much about them. They were both extremely similar in their narratives, which thus often made it difficult to remember whose perspective I was reading from. When the novel starts, Krisayis is biding her time before she becomes old enough to become a priestess under her father's wishes, which is something she does not want to do. Our other protagonist, Briseis, is just about to complete an arranged marriage to a man she does not know - but who she falls right in love with. However, neither of these girls really gripped me; their actions frustrated me, and I had a hard time connecting with them. It's not even that I disliked them as much as I just didn't have much interest.

One aspect of For the Most Beautiful that I particularly enjoyed, however, was the brief bits before some chapters in which we get a view of the gods and their role in this war. Most Trojan War tales seems to focus solely on the mortal side of the war, so I loved being able to see into the conversations of the gods about the war. I do have some mixed feelings about these parts, however, because they played mainly off of stereotypes of the gods. I found myself highly amused by many of their antics, but at the same time I wasn't sure if it was supposed to be as comical as it was. The rest of the story had a very serious atmosphere, so it seemed odd to me that the god portion was so comical.

Everything about this book just screamed 'okay' to me. The characters weren't great, but they weren't really bad either. The plot was interesting enough, but I never felt disappointed that I had to put the book down and go take care of other life activities. I never really looked forward to reading this book. I; it just felt like I had read it all a thousand times before. Despite this, I can say that the writing itself was well-done, and Hauser has a way of using lovely, flowing language to tell her story.

I don't think I would recommend this to readers who do not already know the Trojan War or who have not read other books about it. I feel that this would be enjoyed more by those who are already familiar with the story and are interested in a fun depiction of the gods and a somewhat new perspective of the events of the war.

Overall, I am giving For the Most Beautiful three stars!

You might also like:
Cleopatra's Shadows by Emily Holleman
Helen of Troy by Margaret George
And I Darken by Kiersten White
Posted by Jordan @ForeverLostinLiterature at 8:28 AM