Mudmen: The Quest for Humanity by Shitij Sharma 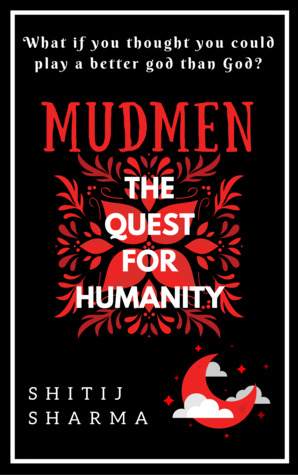 
The question "What if you thought you could play a better god than God?" begins the synopsis of Mudmen: The Quest for Humanity, and easily draws the reader in to an extremely creative, imaginative world. Whether one actually believes in a god or not, this question poses an intriguing idea, which is exactly what Shitij Sharma explores throughout his book.

There was a lot to pack into such a short book, but I think Sharma managed this feat with a talented hand.  Something that really stood out for me and that I particularly loved was how this book read almost like a classic fairy tale in the sense that it was engrossing and ever so whimsical. However, there were ever-present darker aspects that lurked around the edges of every scene and page, which added a great deal of depth and intrigue to the story overall.

I find it difficult to describe the plot itself without going into too much detail, and I feel that this story is best read without too much knowledge beforehand of its contents. There didn't actually seem to be an overly apparent storyline to follow, but Sharma's vivid storytelling was enough to keep me engaged. I felt that this story had a lot of potential that was developed quite as fully as it could have been, but this is an area that I feel could be addressed in subsequent novels.

Along with the fantastic  elements, Mudmen is also largely characterized by philosophical undertones that are occasionally hard to grasp, but overall fascinating. I found there to be a lot going on in this short novel, which did occasionally make it hard to follow. The Mudmen creatures themselves were one of the most interesting aspects of the book, and I enjoyed seeing how they interacted with one another and the world around them.

Overall, I am giving Mudmen four stars! I was extremely impressed with the depth and concept of this story, and seeing as Sharma is still only nineteen years old, I think it's safe to say that we can expect many more great works from him!

*I received a copy of Mudmen courtesy of Shitij Sharma in exchange for an honest review.*

You might also like:
The Treading Twisted Lines Story Cycle by Beth Madden
The Tragedy of Fidel Castro by Joao Cerqueira

Posted by Jordan @ForeverLostinLiterature at 8:56 AM