Waiting on Wednesday: The Strange Case of the Alchemist's Daughter by Theodora Gloss 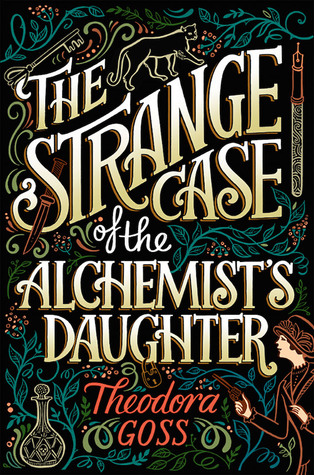 "Mary Jekyll, alone and penniless following her parents' death, quickly finds herself drawn into the secrets of her father's mysterious past. A clue leads her to believe that Edward Hyde, her father's former friend and a murderer, may be nearby, and there is still a reward for information leading to his capture - a reward which would solve all er immediate financial woes. Her hunt leads her not to Edward Hyde but to Diana, his daughter, a near feral child left to be raised by nuns.
With the assistance of Sherlock Holmes and Dr. Watson, Mary continues her search for the elusive Hyde and soon gathers around her more women, all of whom have been created through terrifying experimentation: Beatrice Rappaccini, Catherine Moreau, and Justine Frankestein. When their investigations lead them to the discovery of a secret society of immoral and power-crazed scientists, the horrors of their past soon arrive as well, and it is up to the five of them to stop the malicious machinations of the Société les Alchimistes. It is time for the monsters to triumph over the monstrous."

I love Robert Louis Stevenson's The Strange Case of Dr. Jekyll and Mr. Hyde - it's one of my favorite stories. (Does anyone else remember that episode from the show Arthur that was Dr. Jekyll and Mr. Hyde themed? No?) I also love the Sherlock Holmes stories. So combining those characters, along with the many any other intriguing character names - Catherine Moreau, Justine Frankenstein - makes this book sound incredible! I am so intrigued by this, not to mention that absolutely gorgeous cover.