The Gatekeepers by Chris Whipple 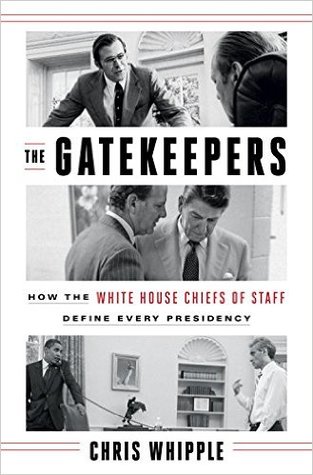 I'm a big fan of 'behind-the-scenes' types of books, especial when they are about something as important as the White House, so I was very eager going into The Gatekeepers. (Digression: You know all those 'bonus features' and 'behind-the-scenes' segments that are often on DVDs? Yeah, I hate those. I really don't need it to be rubbed in my face that the entire movie is actually a green screen. Thanks for ruining it.) Each chapter of The Gatekeepers covers one presidency and includes every Chief of Staff. These chapters each seemed to spend adequate time looking at the tactics of each Chief of Staff, both from the observations of others and from direct interviews with the former Chiefs themselves that the author conducted.

The White House Chiefs of Staff are extremely important, arguably vital components to any presidency. Despite that, I had almost no idea what they really did prior to reading this book. Growing up, I was never much interested in American history/politics -- what can I say, I've always had more of a taste for the fantastic and non-US history (but don't worry, I now pay plenty of attention to both) -- so although I knew that they were a leader of some sort, I had no idea that they were essentially the 'gatekeepers' to the president. Or that having an efficient Chief of Staff meant that you had someone who completely organized the white house staff, acted as an 'organizer' for the president himself, and helped determine who got to take up the president's time each day.

The Gatekeepers is incredibly enlightening, covering over fifty years of presidencies starting from Richard Nixon and onward. Whipple went deep into his research and covered each Chief of Staff -- as there were often multiple ones for each presidency -- with thorough detail. Not only do you learn about the exact duties of the Chief of Staff, but you also get an inside look at each president and how they handled their own duties as president. I was fascinated to read the differences between presidents like Nixon, Reagan, Clinton, and Obama and how differently they handled different situations and interacted with their Chief of staff. Each one also seemed to handle their role with a unique flair, some taking an extremely rough, firm role that was almost feared, while others just weren't quite capable of handling the role. And, of course, there are more than a couple that excelled and handled the difficult task smoothly.

I also took away from this book that the White House is a very interesting place. There is definitely a select group of people that truly hold the cards and that seem to appear throughout almost every presidency. Similarly, the Chiefs of Staffs almost seemed to be a bit repetitive at times: they kept making the same mistake that the former Chief did. That felt frustrated, because I just wanted them to learn more from their predecessors, but each man seemed to think that he knew how to do it better and make it work. You know how it goes.

There are a few areas in a couple chapters where I felt as if things started to go on a little bit of a tangent, as I remember thinking "wait, where is the Chief of Staff in all of this?" Overall, though, everything fit in well and I was kept engrossed for a majority of the chapters in this book. I was impressed by Whipple's smooth writing style and how entertaining I found this book to be. The pacing was done well, and none of the chapters dragged on too long or felt too brief.

Overall, I would definitely recommend this to anyone who's looking for a more in-depth look at some of the roles in the White House, or for someone who just wants some engaging nonfiction!


Posted by Jordan @ForeverLostinLiterature at 7:37 AM