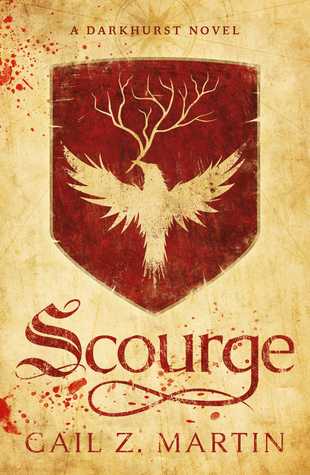 If you are looking for some fast paced, action-packed, monster-filled fantasy then stop where you are, because Scourge is the book for you.

Scourge is an unexpected combination of the undertaker profession, monster hunting, and a strong focus on the bonds of brotherhood. The story centers around the Valmonde brothers -- Kell, Rigan, and Corran -- as they take over their family business as undertakers after the deaths of both of their parents. They use their grave magic to not only allow spirits to pass over, but also to banish bad spirits. They also become dragged into an attempt to unnerve just who is unleashing these deadly monsters upon the citizens of Ravenwood -- and why.

This seems to be a crossover of horror and fantasy and I really think it worked out well. The worldbuilding on Martin's part is really well done. Ravenwood is not somewhere I would want to live, namely because of the horrible guards that prowl the streets and readily take out their anger on those breaking minor rules or those who are caught past curfew -- often with violent results. I really felt trapped in this small town with the brothers and I could feel the fear build as the monster attacks increased. Not only does Martin create an intricate framework for her setting, but she also adds in such a wide array of monsters that you can't help but become involved in the folklore of the world she has created.

Despite all of the positive attributes I've just described, I also had some issues with this book. I actually found myself rather bored for a small portion of the chapters that are dedicated to the POV of another character, Lord Mayer Ellor Machison. This is where Martin's worldbuilding and political intrigue excels in depth and complexity, but falls short in capturing my attention. I just could not follow the endless info-dumping and detailed politics that she creates. If you are able to enjoy and follow that much exposition, then you might really like this, but I personally found it a bit tedious and overmuch.

Also, another minor quibble I had was that of the few female character that were in this book, they all seemed... the same. I'm really not sure if I could tell you the differences between two of the main supporting female characters, other than their professions and appearances.

My last issue was with the brothers themselves. Although I did enjoy each of their characters, they did feel a bit similar at times, and I occasionally seemed to have trouble discerning between each one at times. However, I did very much enjoy watching their relationship grow and develop as they had to learn to rely on one another more and more.

Overall, I've given Scourge three-and-a-half stars. If you're looking for some page-turning action, then definitely go pick up a copy of Scourge! That cover alone is enough to entice me, if we're being completely honest here.

I am also an Amazon affiliate, so if you'd prefer to shop through Amazon, just click the banner on the upper right hand side of my blog! (above the 'Follow by email' box, you may need to turn off adblock to see it!)
You might also like:
More than Monsters by J.M. Riou
A Vanishing Glow by Alexis Radcliffe
An Ember in the Ashes by Sabaa Tahir
Throne of Glass by Sarah J. Maas

Posted by Jordan @ForeverLostinLiterature at 7:31 AM