The Witches of New York by Ami McKay 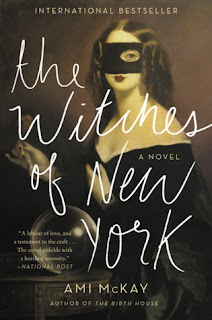 If you haven't already figured it out, I am a huge fan of witches, books set in the 19th century (or any historical setting, if we're being honest), sharp writing, and incredible detail, so combining all of that together into this one book is one big 'yes please!' from me. The Witches of New York is a novel that showcases the strength and tenacity of women and the great lengths to which some men will go to in order to shut down anything that they fear or feel threatened by.

There is a lot going on in this book, but McKay proves her brilliance by making every minuscule aspect of this story simply glow with charm and an engaging storyline. McKay's writing itself is incredibly sharp and full of wit, not to mention the sharp feminist themes that simply propel this book into being even more captivating and relatable than I thought possible.

Adelaide, Eleanor, and Beatrice are our three leading ladies, and they are a force to be reckoned with. I was so impressed at how detailed and unique each one was. Not only does McKay give each woman a voice to be themselves, she also provides intricate backstories that bring so much life to each character. I also loved the range of additional characters that McKay included, from the skeptics to the believers to everyone in between. This, of course, includes characters who vehemently abhor witches and anything to do with witchcraft, whom McKay crafts to be so repulsive that it's almost difficult to read their chapters.

Eleanor and Adelaide are the owners of their tea shop (and perhaps a bit more), Tea and Sympathy and are both established witches. Beatrice is a young newcomer to the big city and is taken under their wings to build up her own abilities. Eleanor is a firm woman whose loyalty and steadfastness are incredibly admirable; Adelaide has many of the same qualities, but she is ever so slightly more outspoken and prone unpredictability than Eleanor. Beatrice, being young and unused to large cities, is a rather shy, polite young woman who is thrust into an entirely new life and world--and she seems to handle things fairly well, if I may say so. The POV remains third person limited throughout the book, but various chapters switch between Eleanor, Adelaide, Beatrice, and a variety of other characters, both big and small.

This book is fairly long, and there are so many chapters and scenes that feel like they should be removed in an abridged version of this, but as the story progresses it becomes more and more apparent how each seemingly meandering chapter or seemingly unimportant character ends up playing an extremely important role. There were times when I started to feel a bit impatient with these moments and i often wished that there weren't so many, but at the same time I liked the extra detail and how much it added to the story, so I'm afraid I have rather contradictory feelings on that front.

One of the most prominent places where this book shines is the sheer detail and authenticity of the usage of spells, herbs, and other witch-y aspect. McKay weaves this incredibly believable and fascinating usage of magic that truly brings everything to life. Every little note or comment about the usage of various herbs or the specific tasks that must be undertaken to perform a certain spell was just so much fun and completely drew me in. McKay clearly enjoys writing and taking her time to make the entire atmosphere perfect.

There is a lovely incorporation of real history in this book as well, such as the inclusion of the suffragette movement, the movement of Cleopatra's Needle, and other notable elements of the period.

Overall, I've given The Witches of New York four stars!

You might also like:
The Miniaturist by Jessie Burton
The Watchmaker of Filigree Street by Natasha Pulley
The Book of Speculation by Erika Swyler
Uprooted by Naomi Novik

Posted by Jordan @ForeverLostinLiterature at 6:59 AM