The Abbot's Tale by Conn Iggulden 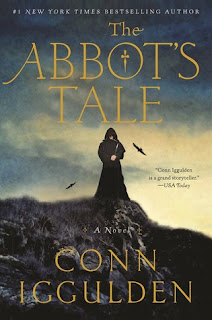 The Abbot's Tale is a a fictional autobiography of Saint Dunstan of Glastonbury during the mid-900s AD. This story follows Dunstan through the beginnings of the creation of England as well as his creation of the Glastonbury Abbey and the Canterbury Cathedral.

This was a highly interesting story about a man who I really knew next to nothing about. I've seen Conn Iggulden's books around, but this is the first book by Conn Iggulden that I've read--and it certainly won't be the last. It's clear that Iggulden performed immense research on the setting and historical events of the story and did his best to fill in the gaps about Dunstan for the rest, as there isn't all that much known about Dunstan himself. The Abbot's Tale completely transported me to this historical time period and I loved learning about it because I really haven't read much during this particular setting.

Dunstan is an extremely unlikable character. There are not a lot of redeemable qualities present in his personality and character, but somehow he is a still a fascinating figure to follow. He presents some interesting ideas and undertakes a variety of different actions and projects that make it interesting enough to follow along and become invested in him and his life. He accomplishes much throughout his life in many unexpected and creative ways, but outside of that he is a bit of a horrible person that does a lot of questionable things throughout his life. He's a smart man, but he's not a good man.

Despite the interesting subject matter of this book, it's still a moderately length book that took me quite a while to get through. It's very slow-paced without many large events occurring, so it takes a lot of determination and effort to really follow along. There were times when it felt like the story dragged, but I hesitate to say that it was boring, however, because when I think about my time reading it I never found myself struggling to get through. I was very much engaged in the story, but I wasn't necessarily blown away by what I was reading.

This review is a bit shorter today simply because I feel as though I don't have much to say about this book. It is a strong, solid story about a fascinating person, but it's nothing overly special or something I want to rave about. In the same manner, it's not a bad book in any way and I would absolutely recommend it. It falls somewhere in the middle as a great book that I am glad I read, but that doesn't exactly stand out in any exceptional way.

Overall, I've given The Abbot's Tale four stars! I can't wait to dig into more of Iggulden's extensive bibliography of other historical fiction novels.

*I received an ARC of The Abbot's Tale courtesy of NetGalley and Pegasus Books in exchange for an honest review. This has no effect on my rating.*

You might also like:
The Confessions of Young Nero by Margaret George
Feast of Sorrow by Crystal King
Posted by Jordan @ForeverLostinLiterature at 7:21 AM