Review: Mistress of the Ritz by Melanie Benjamin 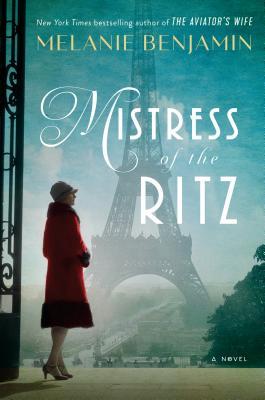 About Mistress of the Ritz:


"Nothing bad can happen at the Ritz; inside its gilded walls every woman looks beautiful, every man appears witty. Favored guests like Ernest Hemingway, F. Scott Fitzgerald, Coco Chanel, and the Duke and Duchess of Windsor walk through its famous doors to be welcomed and pampered by Blanche Auzello and her husband, Claude, the hotel's director. The Auzellos are the mistress and master of the Ritz, allowing the glamour and glitz to take their minds off their troubled marriage, and off the secrets that they keep from their guests--and each other.

Until June 1940, when the German army sweeps into Paris, setting up headquarters at the Ritz. Suddenly, with the likes of Hermann Goring moving into suites once occupied by royalty, Blanche and Claude must navigate a terrifying new reality. One that entails even more secrets. One that may destroy the tempestuous marriage between this beautiful, reckless American and her very proper Frenchman. For the falsehoods they tell to survive, and to strike a blow against their Nazi "guests," spin a web of deceit that ensnares everything and everyone they cherish.

But one secret is shared between Blanche and Claude alone--the secret that, in the end, threatens to imperil both of their lives, and to bring down the legendary Ritz itself.

Based on true events, Mistress of the Ritz is a taut tale of suspense wrapped up in a love story for the ages, the inspiring story of a woman and a man who discover the best in each other amid the turbulence of war."

There is a seemingly endless supply of books set somewhere and sometime during World War II, which makes it rather difficult to find stories that take a new approach to the setting and are able to introduce something that hasn't been seen before. Mistress of the Ritz was a refreshing take on this time period and I truly enjoyed following the characters in this book as they navigated the tensions and struggles associated with the Nazi regime. I don't generally read that many WWII books anymore because I got so burnt out on them, but I'm glad I decided to give this book a shot!

Mistress of the Ritz follows married couple Blanche and Claude Auzello as they learn how to live through the Nazi regime--and more importantly as the Nazis both take over control of the famed and luxurious Ritz hotel as headquarters and take over more and more of France and surrounding countries. I absolutely loved the hotel setting (pre-Nazis, of course), and this was part of what first enticed me to read this book. The cameos and appearances of famous figures and celebrities were exciting and felt rather like inside jokes at times, which I appreciated, and the descriptions of the goings-ons and regular routine of the hotel were such an interesting component. I loved the behind the scenes look of how luxurious things were and also how things slowly changed over time as the Nazis remained at the hotel and essentially dictated how everything was handled there. It was a tense, melancholy sort of atmosphere that permeated at many times and led to a really interesting narrative. Even with this atmosphere, however, the story still remained fairly upbeat and steady as the characters handled various obstacles and learned how to take new steps to adapt to their surroundings while also remaining true to their morals.

Much like in the previous book I read by Benjamin, The Girls in the Picture, the protagonists were heavily flawed, but also relatable enough that I found myself drawn to them and eager to see how things worked out for them. Blanche felt like the main focus of this book and I really loved seeing her character develop from someone rather flighty and carefree to someone who really makes an effort to change her ways and do things that are bigger than her to make a difference. Claude took a while for me to warm up to, as he has some less-than-favorable qualities as both a man and a husband that made it hard for me to understand him or get behind his actions. That being said, he does have some slow development that put me into his shoes and let me at least understand his actions, even if I didn't always agree with them. Both characters have many layers to unpeel throughout the story and I thought that Benjamin executed this really well. These are characters that aren't always easy to love, but struggle with so many things that everyone can relate to that it's easy to follow into their lives.

The POV switches between Blanche and Claude, as well as between various time periods in their lives, centering largely between the present narrative and starting at a specific time in the past when they first met. I found the time period switches slightly difficult to follow at times because of how often it jumped around and also with how the two characters would often reminisce about moments in the past while telling the present narrative.  It made it easy for me to forget that we were in the present narrative rather than the past--if any of that makes sense. This is similar to what Benjamin did in The Girls in the Picture, so it seems to be a stylistic preference. Other than that hiccup in the storytelling, I had no problems with the POV.

Overall, I've given Mistress of the Ritz four stars! This was a really well done book set during WWII with colorful characters that are full of mixed morals, but also entirely compelling. If you, like me, ever find yourself fatigued of WWII books--or even if you love them and just want something new--I encourage you to pick up Mistress of the Ritz.

*I received a copy of Mistress of the Ritz in exchange for an honest review. This has no effect on my rating of the novel.*