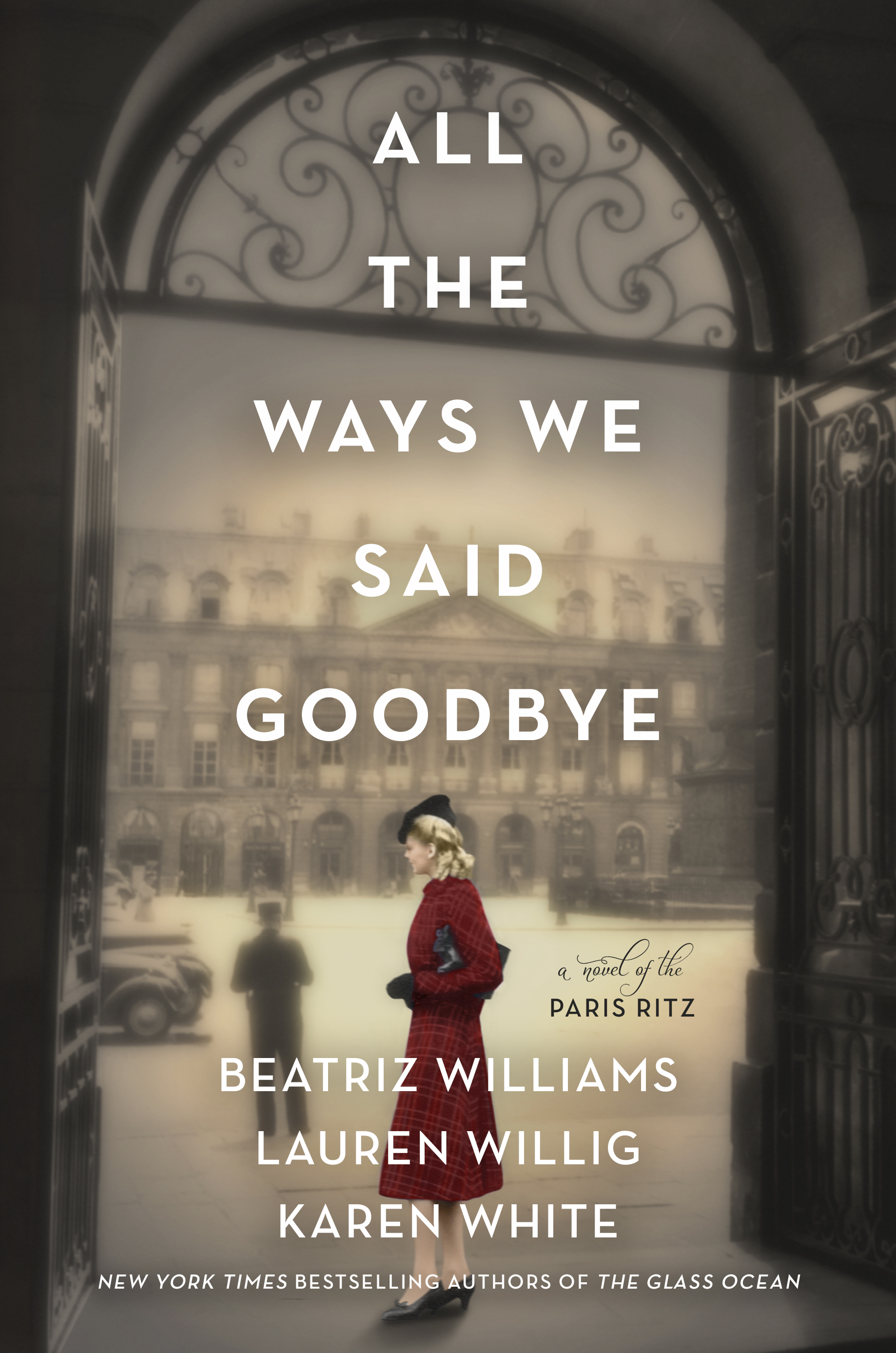 About All the Ways We Said Goodbye:

"The heiress . . .
The Resistance fighter . . .
The widow . . .
Three women whose fates are joined by one splendid hotel

France, 1914. As war breaks out, Aurelie becomes trapped on the wrong side of the front with her father, Comte Sigismund de Courcelles. When the Germans move into their family’s ancestral estate, using it as their headquarters, Aurelie discovers she knows the German Major’s aide de camp, Maximilian Von Sternburg. She and the dashing young officer first met during Aurelie’s debutante days in Paris. Despite their conflicting loyalties, Aurelie and Max’s friendship soon deepens into love, but betrayal will shatter them both, driving Aurelie back to Paris and the Ritz— the home of her estranged American heiress mother, with unexpected consequences.

France, 1942. Raised by her indomitable, free-spirited American grandmother in the glamorous Hotel Ritz, Marguerite “Daisy” Villon remains in Paris with her daughter and husband, a Nazi collaborator, after France falls to Hitler. At first reluctant to put herself and her family at risk to assist her grandmother’s Resistance efforts, Daisy agrees to act as a courier for a skilled English forger known only as Legrand, who creates identity papers for Resistance members and Jewish refugees. But as Daisy is drawn ever deeper into Legrand’s underground network, committing increasingly audacious acts of resistance for the sake of the country—and the man—she holds dear, she uncovers a devastating secret . . . one that will force her to commit the ultimate betrayal, and to confront at last the shocking circumstances of her own family history.

France, 1964. For Barbara “Babs” Langford, her husband, Kit, was the love of her life. Yet their marriage was haunted by a mysterious woman known only as La Fleur. On Kit’s death, American lawyer Andrew “Drew” Bowdoin appears at her door. Hired to find a Resistance fighter turned traitor known as “La Fleur,” the investigation has led to Kit Langford. Curious to know more about the enigmatic La Fleur, Babs joins Drew in his search, a journey of discovery that that takes them to Paris and the Ritz—and to unexpected places of the heart. . ."

All the Ways We Said Goodbye is not the sort of historical ficiton that I usually gravitate towards since I tend to prefer predominantly pre-1960s historical fiction, but I'm glad I decided to give it a chance because it turned out to be a really satisfying story of three women as they navigate war-dampened settings. This was also one of the few novels depicting a WWII timeline that I decided to read last year and I am so glad I did because it was a lot more than the typical World War-based books out there.

We follow three different perspectives of women currently living in France: Aurelie in 1914, Daisy in 1942, and Babs in 1964. In the beginning, I had a bit of a hard time distinguishing between the three characters. They were all obviously in three very different settings, but I still had to keep reminding myself who had said what, what each one's personality was like, and take a moment to stop and remember each woman's background. Fortunately by the halfway mark I was much clearer on each character and more immersed in each one's story, which made it so much easier to enjoy and distinguish between each individual character.

Aurelie is a stubborn and strong young woman whose home is overtaken by soldiers in the first world war. Neither her, her father, or the servants working at their home are pleased by this turn of events and Aurelie is as confrontational as possible without causing anyone to come to harm. I didn't immediately warm to Aurelie's narrative sections as much as I did with the others, but as the story progressed I found myself more and more interested in her story.

Then there's Daisy, wife of a man who begins working with the Nazis, who eventually becomes her own form of resistance fighter. Daisy was a joy to read and by far one of the more compelling narratives of the three. I found her character development wasn't quite as smooth as it could have been, but I didn't have any major issues with her as a character.

Lastly is Babs, which is the least "action-based" of the narratives and is more about Babs discoveries and research into her husband's past during the war. Babs was a bit of an unpredictable character--and I'm not sure if she's unpredictable in a good or bad way, perhaps neither--who I found it difficult to connect with at times. Her actions made it difficult to remember her age and role in this multi-layered overarching narrative, but despite this I still liked joining her as she looked into who the mysterious "La Fleur" was that her husband knew.

By the halfway point or so I had some ideas of how these three narratives would tie together, but by the end I was still impressed by how well these three authors managed to tie everything together. It's a little complex in some ways and I struggled at times remembering all the different people and roles involved, but at the end of the day I found it to be a perfect combination.

This book is slightly on the slower side as far as pacing goes, but it's a steady pace that made this an easy book to pick up and keep turning the pages. I found the writing of these three authors highly engaging--it isn't said which author writes which narrative, but I found that they all meshed together really well and it's obvious that they have a great collaboration together.

If you're looking for a historical fiction book about the World Wars that really focuses on the action and general war itself, then this probably isn't what you're looking for. Although the first two narratives depicted women who were active during the wars and did their part, this book is much more about the relationships of these women and how they have created their own lives amidst the turmoil of war backdrops.

Overall, I've given All the Ways We Said Goodbye 3.75 stars. This was a really enjoyable historical fiction that I'd absolutely recommend to anyone who enjoys multiple perspectives, timelines that span multiple decades, or a focus on characters and relationships.


*I received an ARC of All the Ways We Said Goodbye courtesy of NetGalley Overlook Press in exchange for an honest review. This has no effect on my rating of the novel.*