Top Ten Tuesday: TBR Update--Have I Been Reading the Books I've Said I Will?

This week's topic is:  Anniversary Freebie--Update an Old TTT!

It's the tenth anniversary of Top Ten Tuesday, today! Huge thanks and appreciate go out to The Broke and the Bookish who first started and hosted this wonderful weekly post. :)
I've only been participating for the past four years or so, but I've had a really fun time exploring new topics and ideas about aspects of books I might've never considered. Today is a freebie with the overall theme of picking a past TTT post and updating it. There are so many topics that I could pick to update, but I finally decided to go back and look through some old TBR-style posts and see which books I've actually read since posting about them. I've selected four posts with TBR posts to look through and I'm going to put a red 'X' over the covers of the ones I've read. The reason I don't usually make TBRs is because I'm a mood reader and don't tend to stick to them... so we'll see how much that holds true, haha. Fingers crossed this doesn't turn out to be too embarrassing! And do let me know if you've read any of these and what your thoughts are on them! 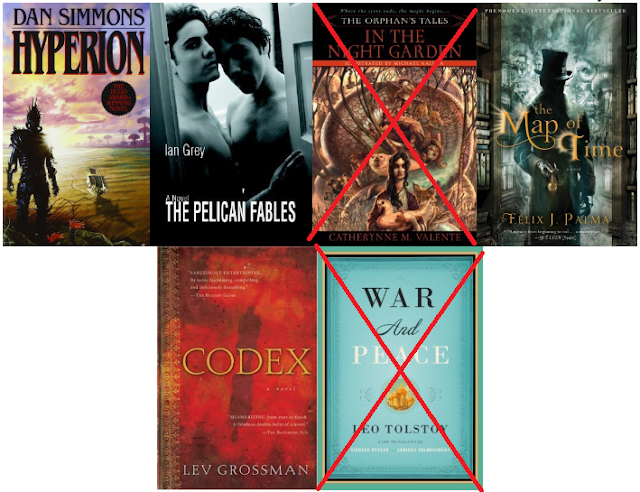 Read: In the Night Garden by Catherynne M. Valente, War and Peace by Leo Tolstoy

Unread: Hyperion by Dan Simmons, The Pelican Fables by Ian Grey, The Map of Time by Felix J. Palma, Codex by Lev Grossman

So, 2/6 isn't exactly promising, but I guess I can at least hold onto the fact that War and Peace was a pretty hefty tome to get through and I'm glad I actually read it (and mostly enjoyed it!). I still want to read all of the ones I haven't! 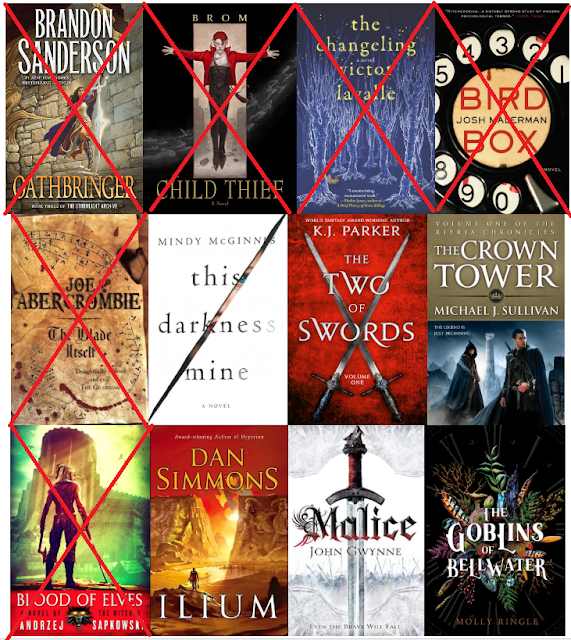 Read: Oathbringer by Brandon Sanderson, Child Thief by Brom, The Changeling by Victor Lavalle, Bird Box by Josh Malerman, The Blade Itself by Joe Abercrombie, Blood of Elves by Andrzej Sapkowski.

Unread: This Darkness Mine by Mindy McGinnis, The Two of Swords by K.J. Parker, The Crown Tower by Michael J. Sullivan, Ilium by Dan Simmons, Malice by John Gwynne, The Goblins of Bellwater by Molly Ringle.

I read 6/12, and I feel pretty good about 50%--honestly, it's a lot more than I expected! Dan Simmons once again goes unread--I'm not sure why I am so hesitant to actually pick up his work, but whenever I consider it I think I start to feel a bit intimidated by them. Maybe one day? Malice is one that I am still hoping to read semi-soon since I already own it, and The Crown Tower and This Darkness Mine are both high up on the list! 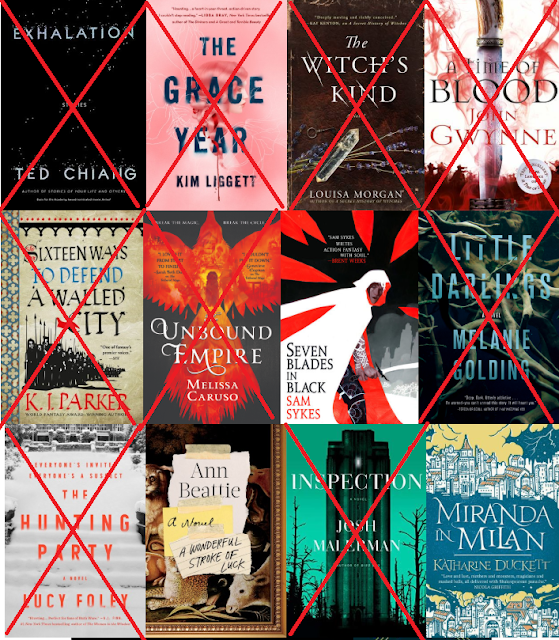 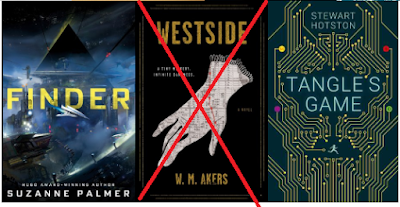 Read: Exhalation by Ted Chiang, The Grace Year by Kim Liggett, The Witch's Kind by Louisa Morgan, A Time of Blood by John Gwynne, Sixteen Ways to Defend a Walled City by K.J. Parker, The Unbound Empire by Melissa Caruso,  Little Darlings by Melanie Golding, The Hunting Party by Lucy Foley, Inspection by Josh Malerman, Westside by W.M. Akers,

I read 10/15, which is even more surprising to me! I really enjoyed just about all of the books from this list that I read, and I'm still really interested in reading the ones I didn't. Miranda in  Milan is probably one I'm most interested in picking up. 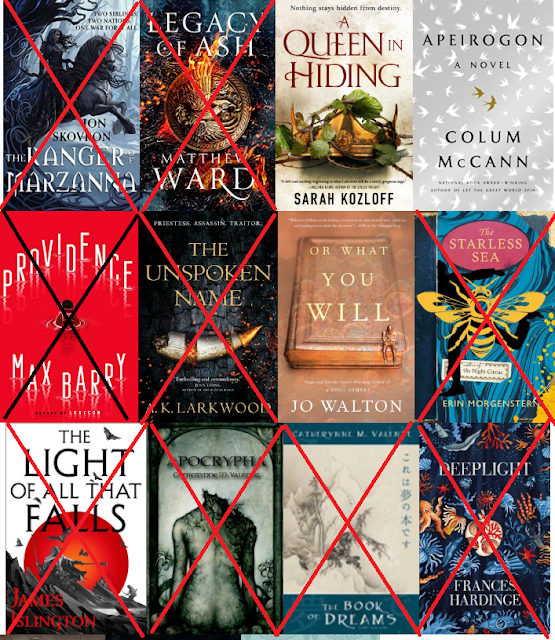 Read: The Ranger of Marzanna by Jon Skovron, Legacy of Ash by Matthew Ward, Providence by Max Barry, The Unspoken Name by A.K. Larkwood, The Starless Sea by Erin Morgenstern, The Light of All That Falls by James Islington, Apocrypha by Catherynne M. Valente, The Book of Dreams by Catherynne M. Valente, Deeplight by Frances Hardinge, Above the Treeline by Gregory Manchess

Unread:  A Queen in Hiding by Sarah Kozloff, Apeirogon by Colum McCann, Or What You Will by Jo Walton, The Throne of the Five Winds by S.C. Emmett, In the Heart of the Sea by Nathaniel Philbrick, Brideshead Revisited by Evelyn Waugh


10/16! Technically it's less than the previous post, but I'm not complaining about having more than half of this selection. Above the Timberline is a particularly beautiful book that I highly recommend if you love gorgeous illustrations and a unique and incredible journey. I really liked all the books I read from this one save The Ranger of Marzanna, which I DNF'd.


Have you read any of these books? Do you want to read any? Any you'd recommend that I haven't read yet? Let me know!
Posted by Jordan @ForeverLostinLiterature at 2:00 AM