Review: The Portrait of a Mirror by A. Natasha Joukovsky 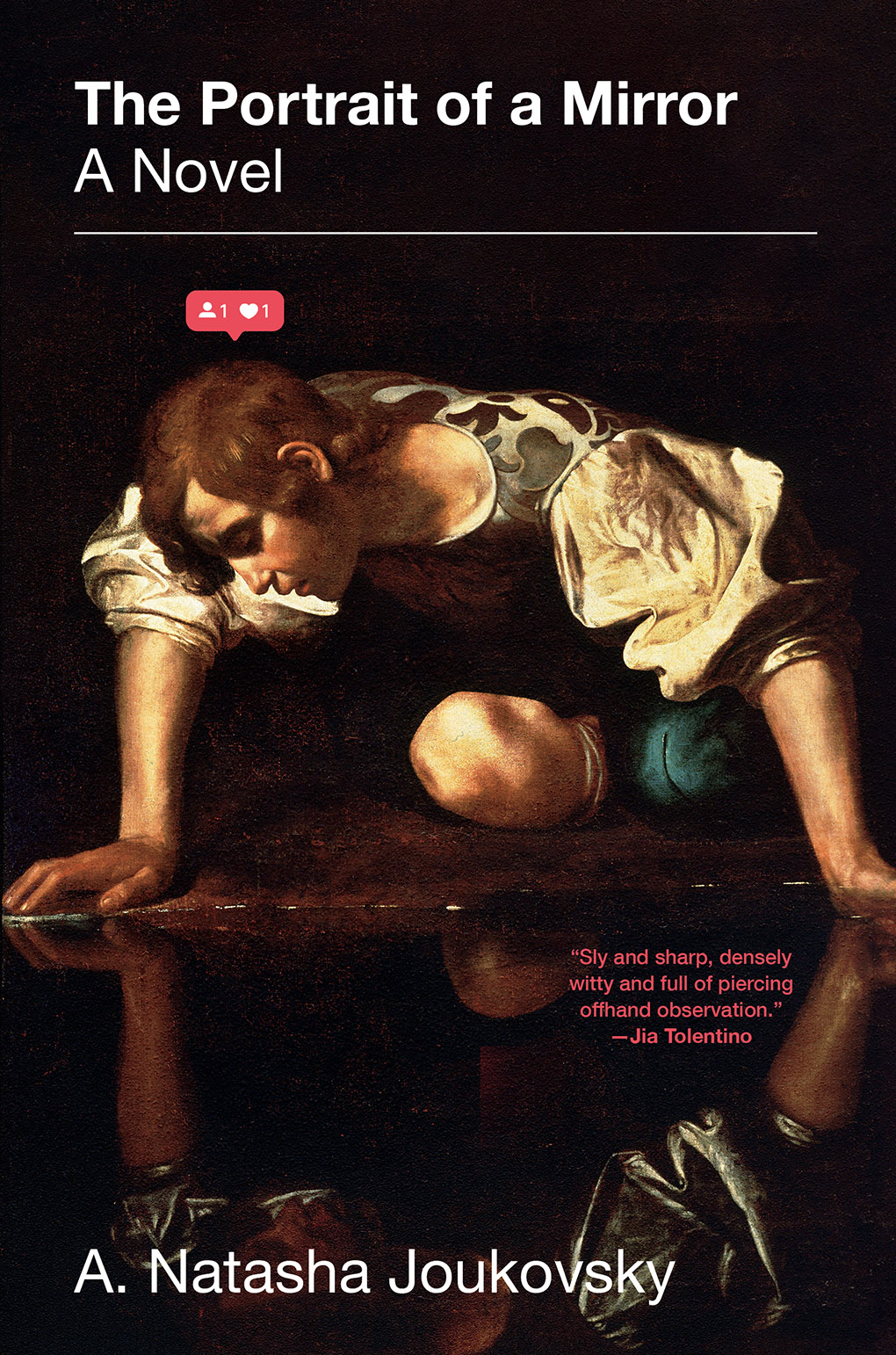 The Portrait of a Mirror by A. Natasha Joukovsky
The Overlook Press
Publication Date: June 1st, 2021
Hardcover. 320 pages.
About The Portrait of a Mirror:
"A stunning reinvention of the myth of Narcissus as a modern novel of manners, about two young, well-heeled couples whose parallel lives intertwine over the course of a summer, by a sharp new voice in fiction.
Wes and Diana are the kind of privileged, well-educated, self-involved New Yorkers you may not want to like but can't help wanting to like you. With his boyish good looks, blue-blood pedigree, and the recent tidy valuation of his tech startup, Wes would have made any woman weak in the knees—any woman, that is, except perhaps his wife. Brilliant to the point of cunning, Diana possesses her own arsenal of charms, handily deployed against Wes in their constant wars of will and rhetorical sparring.
Vivien and Dale live in Philadelphia, but with ties to the same prep schools and management consulting firms as Wes and Diana, they’re of the same ilk. With a wedding date on the horizon and carefully curated life of coupledom, Vivien and Dale make a picture-perfect pair on Instagram. But when Vivien becomes a visiting curator at The Metropolitan Museum of Art just as Diana is starting a new consulting project in Philadelphia, the two couples’ lives cross and tangle. It’s the summer of 2015 and they’re all enraptured by one another and too engulfed in desire to know what they want—despite knowing just how to act."

The Portrait of a Mirror is an incredibly clever and amusing story of the elite classes. The story follows Wes and Diana from New York and Dale and Vivian from Philadelphia. The two couples lead separate lives that slowly begin to intertwine in this story as Wes and Vivian meet at The Metropolitan Museum of Art and Dale and Diana begin working on a consulting project together in Philadelphia.

The writing style of The Portrait of a Mirror does not make for easy reading and is often as pretentious as the characters themselves, but it's a self-aware pretentiousness that was done in order to exacerbate and reflect elite society and is perfectly executed. It's clear that Joukovsky knows how to not only write well, but how to write with a specific theme and message in mind that she is able to convey through her tone and style. This book is described as a "reinvention of the myth of Narcissus" centered on people who are in love with themselves, and that is entirely accurate and reflected perfectly with the overly description writing that is clearly in love with itself as well, a la Narcissus.

This isn't a story with a lot of plot or where a lot of things happen; rather, it's a character study of our four narcissistic characters and a biting observation of the society and culture they inhabit. I think the depictions of the characters and the excessive prose are meant to elicit a certain sense of annoyance by the readers at the pomposity and arrogance of the characters, but it's also supposed to act as a humorous nod towards something that we are supposed to understand and find amusing (I'll elaborate a bit on this statement in the next paragraph, don't worry). Vivien is a curator, which likely draws upon Joukovsky's own time working at the Metropolitan Museum of Art, and I appreciated the ways in which Joukovsky incorporated her speeches and discussions on some of the art pieces in the book, as I found those moments some of the most interesting. Diana, a consultant, was a particularly entertaining character to follow as well, as I found her intelligence and method of handling business, as well as her sharp and engaging dialogue, most interesting to follow. Outside of these points, I didn't really find too much about the characters to find myself interested in or invested in enough to care much about their lives.

Although I am aware of what this book was trying to do and I know that the writing was done as a reflection of society, I struggled with this book at times. The writing was almost too overdone and overwritten to be enjoyable at times, and I felt that even though I could chuckle and shake my head at the witty, timely humor, it just wasn't written for me. This is a book for the elites to read about themselves and laugh along with a "yep, that's how it is" sort of thought. I still enjoyed this book, but it wasn't something that I felt resonated with me in the same way that it might with people who are more familiar with that lifestyle and the general society and group of people that it represents. This isn't really a major critique of the book because it's not a bad thing, it just prevented me from enjoying quite as much. And plenty of people will probably disagree with me and say they had plenty of fun satirizing and mkocking the elite society from a distance–which was definitely enjoyable–but I just don't think that it hit in quite the same manner.

Overall, I've given The Portrait of a Mirror three stars. This was an entertaining story that was intereting to follow along with and to see what Joukovsky did with her writing, but it wasn't necessarily a story that I feel the need to re-read or experience again. It's one of those where I liked it, but I'm not sure how much I enjoyed it. I appreciate it for what it was, and I enjoyed much of Joukovsky's commentary, but that's sort of where my major enjoyment ends. I have zero doubts that this book will be a big hit in the publishing world–and deservedly so–and with people who appreciate some great writing and social commentary, so if any of that sounds like your thing, then I'd recommend you pick this one up.

*I received a copy of The Portrait of a Mirror courtesy of the publisher in exchange for an honest review.*
Buy the book: Amazon | IndieBound
Posted by Jordan @ForeverLostinLiterature at 2:00 AM

Email ThisBlogThis!Share to TwitterShare to FacebookShare to Pinterest
Labels: review, the portrait of a mirror