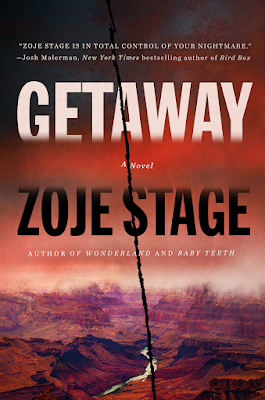 Getaway by Zoje Stage
Mulholland Books
Publication Date: August 17th, 2021
Hardcover. 352 pages.
About Getaway:
"It was supposed to be the perfect week away . . .
Imogen and Beck, two sisters who couldn't be more different, have been friends with Tilda since high school. Once inseparable, over two decades the women have grown apart. But after Imogen survives a traumatic attack, Beck suggests they all reunite to hike deep into the Grand Canyon’s backcountry. A week away, secluded in nature . . . surely it’s just what they need.
But as the terrain grows tougher, tensions from their shared past bubble up. And when supplies begin to disappear, it becomes clear secrets aren’t the only thing they’re being stalked by. As friendship and survival collide with an unspeakable evil, Getaway becomes another riveting thriller from a growing master of suspense and “a literary horror writer on the rise” (BookPage)."

Getaway is the second thriller I've read from Stage (though I have a copy of Baby Teeth I really need to get to!) and it did not disappoint. This was suspenseful, engaging, and all-around an entertaining read.

The story starts out when sisters Beck and Imogen embark on a backpacking journey with an old friend, Tilda through the difficult terrain of the Grand Canyon. It starts out as a fairly normal–albeit difficult–journey, with few minor conflicts, until some unprecedented things begin happening to the girls. Food is stolen from their supply, something that Beck and Imogen would swear would never happen around a backpacking area. To everyone's horror, things take an even more intense turn when they find that they are not alone on their hike and end up fighting for their survival.

I can't say too much more about the plot without spoiling any part of it, but I'll do my best to cover everything to the extent that I can. The setting for this thriller was more unconventional and I really loved getting to explore a story like this in such a unique and beautiful setting. As if an intense hike through the Grand Canyon weren't enough to someone who has never done something so strenuous (yes, "someone" is myself), the thought of something like what happens to these girls happening to me added such an exciting layer of intrigue and creepiness that I really loved.

The three women all have their own personal conflicts and complicated pasts that play a pretty central role in the overall dynamics and character development of each. Tilda and Imogen have a pretty contentious relationship, having been close friends years ago before drifting apart due to a rather traumatic event that irrevocably altered their relationship. Watching the two women navigate their feelings towards one another while also handling a crisis situation as the one that arises was really interesting to watch, and I think Stage did really great work of conveying the mix of conflicted feelings that would arise.

I also really appreciated how much time Stage spent on the introspectiveness of Imogen and the characters and their development themselves. I didn't really expect to dive so deep into their psyches and into considering various elements of human nature as much as this book did, and I really appreciated it. The development of the characters was done really well and I felt their development, for the most part, made sense. Beck is the tough leader who seems to always have a logical answer, and it was interesting to see how she handled such an unexpected situation that was completely out of her control. Her passion and personality really came through in those moments. Tilda was also a character that, at the outset, seems to not be the most warm person, but who really has a strong side of her and deep passions for friends and her life. Imogen, our main POV narrator, is an incredibly thoughtful and perceptive person who was constantly thinking about those around her and considering others' reactions to things. The only problem I had with Imogen was that sometimes I felt as though her thoughts and considerations about one particular you'll meet were a bit too far out of normal thinking. I understand empathizing with people who are struggling and who are threats to us in order to understand them, but I also think there's a line that isn't usually crossed when it comes to getting too close to dangerous people, and Imogen went pretty close to it at times in ways I felt a bit unnatural.

Lastly, I'd like to touch on how well I think Stage described the setting of the hike and the sheer beauty that encompasses the Grand Canyon areas. She mentions in her acknowledgments that she has also hiked in the areas, and it's clear that there is a real-life experience backing up these descriptions and the feelings associated with being in nature. It definitely made me feel like going outside and enjoying the beauty of nature–although, preferably somewhere slightly more populated so I don't end up in their similar situation.

Overall, I've given Getaway 4.25 stars! I found myself constantly wanting to pick this up anytime I had to put it down, and I also kept thinking about it whenever I wasn't reading it. This entire premise completely captivated me, and it has also made me even more excited to see what's next from Zoje Stage.

*I received a copy of Getaway courtesy of the publisher in exchange for an honest review.*