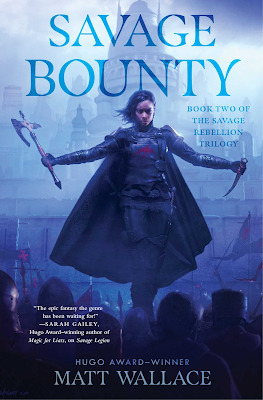 Savage Bounty (Savage Rebellion #2) by Matt Wallace
Gallery/Saga Press
Publication Date: July 20th, 2021
Paperback. 400 pages.
About Savage Bounty:
"The sequel to the acclaimed, spellbinding epic fantasy Savage Legion by Hugo Award–winning author Matt Wallace about a utopian city with a dark secret…and the underdogs who will expose it—or die trying.
They call them Savages. Brutal. Efficient. Expendable. The empire relies on them. The greatest weapon they ever developed. Culled from the streets of their cities, they take the ones no one will miss and throw them, by the thousands, at the empire’s enemies. If they live, they fight again. If they die, well, there are always more.
From Hugo Award–winning author Matt Wallace comes the much-anticipated second installment to the “epic fantasy the genre has been waiting for” (Sarah Gailey, Hugo Award–winning author of Magic for Liars)."

Savage Legion was one of the most unexpected books I read last year because it was a complete surprise–I won it in a Goodreads giveaway!–without know too much about it and ended up absolutely loving it. Savage Bounty, of course, was therefore one of my most anticipated releases/sequels of 2021, and I had such a fun time with the sequel. This sequel didn't grab me quite as much as the first book, but I think that's just because I had so much fun slowly figuring things out about the world and meeting the characters in the first book. I was also worried about not remembering enough from the first book, but Matt Wallace is apparently a gem because there was a couple page "the story so far" available at the start of the book, which saved me immensely!

The world of the Savage Rebellion series has a “utopian” premise that is not quite as it seems, and I have found the different perspectives on this situations that each character brings one of the most interesting parts of this series. I have particularly liked seeing how each character discovers different aspects of corruption, and how Savage Bounty allows those elements to be explored further and for the characters to really start to push against what is generally the norm. The world-building of this series has also been one that I've really enjoyed discovering as it slowly unfolds more and more over the course of the book, and if I had any complaints it would simply be that I want more of it (which isn't really a complaint because we get plenty)!

We follow the same POVs of Evie, Lexi, and Dyeawan as we did in the first book, as well as one additional smaller new POV from Taru, and I couldn't be happier with these POV choices. Evie continues to kick ass as the new face of the rebellion of the Savages, and I loved watching her grow in this role. Lexi is now a prisoner of a seeming madwoman, but she continuously fights and brainstorms ways to save both herself and others. And for those that love the challenge/trials trope, then you will love Dyeawan's storyline in this book. I won't tell you why she ends up competing in a series of three trials, but it's absolutely worth it to find out and her growth throughout these two books has also been immense and excellently written. Taru was such a compelling side character in the first that I am so pleased to see that they were given some more time on the page. Their storyline in this book was, in some ways, relatively minor, but at the same offered some incredible build up for things that will be occurring in the third book.

The pacing felt a bit steadier and slower in general than the first book, but I felt that that was necessary in order to take a closer look at the characters and set up the storyline for the final book. Savage Legion threw us into the world and took us on a whirlwind journey to discover the main characters, and now Savage Bounty is easing off the gas slightly in order to get us even more acquainted with the characters and their journeys. This is not to say, however, that this book was slow or didn’t have big momentous plot movements, because it absolutely did. I was just as hooked throughout this entire book as I was with the first, and I am constantly excited by how compelling the story and the world itself is.

The last thing I'll comment on is Wallace's writing style, which I found incredibly engaging and easy to read. It's not that it's overly simplistic, but rather done in a way that makes it easy to fall into the characters and the story. There's a lot of information to learn about the world, the way society runs, how the Planning Cadre works, and more, but the way Wallace introduces everything and incorporates them into the narrative makes it feel more natural and flow well. I never find myself feeling overwhelmed in this book, which only makes things that much more enjoyable to read.

Overall, I've given Savage Bounty five stars! I've really been loving this series so far and cannot wait to see what's next for these characters and this world.