Mini-Review: Leave the World Behind by Rumaan Alam 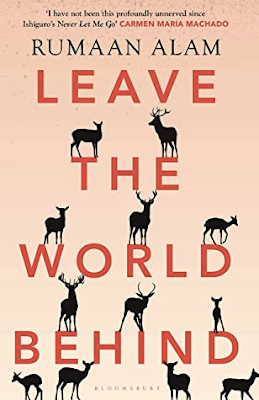 Leave the World Behind by Rumaan Alam
Bloomsbury Publishing
Publication: November 12th, 2022
Hardcover. 256 pages.
About Leave the World Behind:
"A magnetic novel about two families, strangers to each other, who are forced together on a long weekend gone terribly wrong
Amanda and Clay head out to a remote corner of Long Island expecting a vacation: a quiet reprieve from life in New York City, quality time with their teenage son and daughter, and a taste of the good life in the luxurious home they’ve rented for the week. But a late-night knock on the door breaks the spell. Ruth and G. H. are an older black couple—it’s their house, and they’ve arrived in a panic. They bring the news that a sudden blackout has swept the city. But in this rural area—with the TV and internet now down, and no cell phone service—it’s hard to know what to believe.
Should Amanda and Clay trust this couple—and vice versa? What happened back in New York? Is the vacation home, isolated from civilization, a truly safe place for their families? And are they safe from one another?"
When Amanda, Clay, and their two children embark on a short family getaway, they hope to have a nice time to reconnect and relax. Unfortunately, as tends to happen to plans with the best intentions, things do not go according to plan and the owners of the house they are renting for the trip show up unannounced–and the reason why only creates more problems. Leave the World Behind is a slow-paced, creeping sort of thriller that builds up much of its dread-induced atmosphere through the writing and small actions of the characters that leave you feeling uneasy. This is not an overt horror or fast-paced thriller, but rather one of those leaves you feeling unsettled without really knowing exactly why, and also relies on poking at your imagination to make things more ominous.
What I liked: This is not an overt horror or fast-paced thriller, but rather one of those that leaves you feeling unsettled without really knowing exactly why and also relies on poking at your imagination to make things more ominous. This narrative style worked perfectly for this book and had me absolutely captivated. I think a lot of the criticisms of this book are a result of misleading marketing where readers may have expected something a bit more “page-turning” and exciting, when in reality it’s only page-turning if you find yourself invested in this manner of storytelling. Nothing major really happens for a lot of this book, but the implications and actions and thoughts of the characters are what made it so compelling and ominous for me and I just loved it. I don't think this will be for everyone (and based on reviews, it's clearly not!), but if you click with it I think you'll really love it as well.
What I didn't like: As much as I enjoyed how the writing built up the tension in the plot and between characters, I can easily admit that this book is a tad overwritten at times. The prose borders on being too 'purple' at times and inputs some odd, heavy-handed word choices that sort of stick out as the author trying to sound a bit too deep or dramatic. Perhaps this is meant to reflect the characters, but I'm not sure it worked. Similarly, there's a weird oversexualization of characters and actions at times, and some questionable sex-related things in general, such as a grown woman having weirdly sexual thoughts about a grocery bag boy who may be a teenager. There were definitely some weird writing choices in this book that threw me out of it every once in a while.
Overall, I ended up giving Leave the World Behind 4.5 stars! Despite my quibbles with the writing, I actually enjoyed this book way too much to give it something lower. It's not a book for everyone, but if it sounds interesting to you, I'd recommend you give it shot–but maybe get it from your library first, just in case.
Buy the book: Amazon | Bookshop.org
Posted by Jordan @ForeverLostinLiterature at 2:00 AM