Review: One Dark Window (The Shepherd King #1) by Rachel Gillig 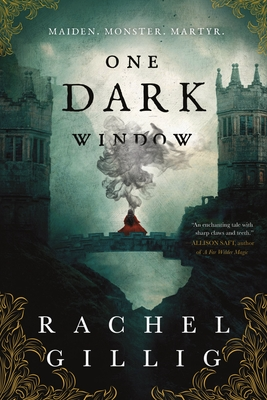 One Dark Window (The Shepherd King #1) by Rachel Gillig
Orbit
Publication Date: September 27th, 2022
Paperback. 432 pages.
About One Dark Window:
"Elspeth Spindle needs more than luck to stay safe in the eerie, mist-locked kingdom of Blunder—she needs a monster. She calls him the Nightmare, an ancient, mercurial spirit trapped in her head. He protects her. He keeps her secrets.
But nothing comes for free, especially magic.
When Elspeth meets a mysterious highwayman on the forest road, her life takes a drastic turn. Thrust into a world of shadow and deception, she joins a dangerous quest to cure Blunder from the dark magic infecting it. And the highwayman? He just so happens to be the King’s nephew, Captain of the most dangerous men in Blunder…and guilty of high treason.
Together they must gather twelve Providence Cards—the keys to the cure. But as the stakes heighten and their undeniable attraction intensifies, Elspeth is forced to face her darkest secret yet: the Nightmare is slowly taking over her mind. And she might not be able to stop him."

If you're looking for an entertaining dark fantasy read for fall, then One Dark Window is probably going to be the perfect choice for you! I loved this dark, mysterious story that has an intriguing magic system, captivating world-building, and characters you can't help but love (and hate, for a few!).

The kingdom of Blunder is secluded and cut off from surrounding kingdoms due to a dark, magical mist that has blocked everyone in. The only way to eradicate this mist and cure those who are infected with dark magic because of it is to collect a full deck of magical Providence Cards to be used against it. This might sound a little confusing here, but I promise the book explains things much better and it'll make a lot more sense when you read the book.

Our protagonist, Elspeth, begins the story already infected with a dark magic that takes the form of a dark entity known as Nightmare that resides in her mind. Since anyone known to be infected with dark magic is known to be cursed and is therefore ordered by the king to be tracked and killed, she works hard every day to keep this secret hide that she was ever afflicted with this magical "fever" that caused her to end up with Nightmare. We follow Elspeth's POV throughout, which includes her many interactions with the Nightmare, and really showcases how she has struggled to survive in this world and with a family dynamic that leaves a lot to be desired. I appreciated Elspeth's resilience throughout the story and seeing how she made different decisions according to what she knew was best and to protect both herself and others. I found her to be a fairly likable and engaging character and enjoyed following Elspeth as a protagonist.

We meet a variety of other characters as well, such as Nightmare himself, as well as Elspeth's family and other prominent families within Blunder. This includes some characters I really liked, such as Ravyn, Elm, and the rest of the Yew family. Nightmare was probably one of the most intriguing characters since he is shrouded in unknowns and darkness and has some delightful dialogue interactions with Elspeth. Ravyn is a more stereotypical "mysterious" love interest who has a lot more to him than meets the eye, and Elm was also a very prickly favorite character of mine who really opened up to readers as the story progressed. All of Gillig's characters seem to be thoughtfully written and incorporated a lot of unique elements that helped showcase different elements of the story and world-building.

When I first started this book, I was a little surprised to come across so many general tropes and setting ideas that I'd seen in other books, from a fake dating trope to a sort of dark magical forest (which is always a favorite!) to character personalities and dynamics that felt very familiar and much more. While some of these aspects are not the most unique or surprising, I'm happy to report that Gillig's manner of incorporating all of these into the story felt fresh and engaging and I ended up loving every bit of it. There is a bit of a romance, hence the fake dating trope, but it's not overly prominent and therefore doesn't take over the story. It was a little hasty for me at times, but not enough to take away from my enjoyment of the rest of the plot and characters. The pacing also felt very steady throughout and I never felt as though I were slogging through any particular moment or that anything was moving too fast (other than the romance at times).

I particularly enjoyed learning how this magic system worked and think the Providence Cards were really fascinating to learn about. providence cards essentially grant users the ability to use magic specific to a specific card. For instance, the Maiden card grants user the ability to possess unparalleled beauty, but it comes at the price of losing your heart in the process. The Scythe card grants users the ability to seemingly influence the minds and motivations of those around them, but comes with its own personal drawbacks as well. In addition to the cards, there's also a magical illness of sorts that can infect children if they get it and almost always results in them having some sort of dark magic and degeneration that eventually ends with their death.

This might sound odd, but one of my favorite parts of this book was the ending. I really loved the dark turns this book took and I have a lot of respect for Gillig's plot choices and where she decided to take this story. I was already excited for the sequel, but after that ending my curiosity and excitement has been immensely increased and I cannot wait to read it.

Overall, I've given One Dark Window 4.5 stars! I really enjoyed this, and although it wasn't necessarily the most groundbreaking story, it still stood out to me as one with engaging characters, a fascinating magic system, and a dark story that kept me hooked. I highly recommend you pick up this perfect dark fantasy fall read!

*I received a copy of One Dark Window courtesy of the publisher in exchange for an honest review.*