Enchantress of Numbers by Jennifer Chiaverini

*Enchantress of Numbers will be released Tuesday, December 5th!* 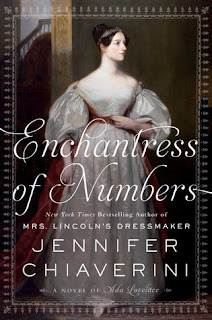 Enchantress of Numbers is a fascinating look into the life of Ada Lovelace and her role in the development of computer programming. I am always interested in novels that discuss the lesser-known roles that women have played in large discoveries throughout history--and there are quite a lot--so I was extremely intrigued to read more about Ada Lovelace. I have previously read The Thrilling Adventures of Lovelace and Babbage by Sydney Padua, so I am familiar with the figures of Ada and Charles Babbage, but I was interested to read more about Ada herself from a more directed point of view.

Chiaverini begins the novel by first telling the story of Lord Byron and Lady Annebella Byron's initial meeting and eventual relationship. I found this to be a useful and interesting addition to the story, which helped to set up a better understanding of how Ada's life ended up being what it was. Chiaverini then continued the story by following Ada from her birth to her unfortunate early death in 1852. I did enjoy reading about her backstory and upbringing.

Ada was an interesting character to explore. She is depicted as an extremely forward-thinking woman who is both confident and ready to push herself and others to achieve great accomplishments. As a woman in the nineteenth century, she really had to force herself into a lot of situations where it was not common for women to be, and fortunately Ada was determined to do just that as a result of her strong passions. I was particularly interested in Ada's friendship with Babbage, and I enjoyed how Chiaverini depicted that relationship throughout the book. It was interesting to watch their relationship form and develop, although Ada herself was not a very dynamic figure in this book.

From a technical standpoint, we don't really know Ada's exact contributions to Charles Babbage's Analytical Engine, and Chiaverini does note this in her Author's Note. She could have been the main creator behind the first computer algorithm, but this exact fact is up for debate among some scholars. Enchantress of Numbers, however, works off of the idea that she contributed quite a lot and is indeed the creator of the first computer algorithm.

One area that I do applaud Chiaverini in is her depiction of the setting and overall context of this story. She did a great job showcasing the current politics, technologies, and culture of the time period and location, which added an authentic atmosphere to the entire book.

The major issue I had with this book, however, was with the writing. Chiaverini's storytelling was not quite as involving as I would have liked it to be. Although I was interested in Ada's life, I didn't have many strong feelings towards her personally or towards any other characters. The author included many details that were helpful in understanding events of Ada's life, but in doing so she seemed to gloss over the more personal aspect that is important in any book that wants to draw readers in.

Overall, I have given Enchantress of Numbers three-and-a-half stars! I highly recommend this to any fans of historical fiction, those who want to learn more about women's contribution to history, or more about the history of technology.

*I received a copy of Enchantress of Numbers courtesy of the publisher and NetGalley in exchange for an honest review. This has no effect on my rating of the book.*

You might also like:
The Other Einstein by Marie Benedict
Cleopatra's Shadows by Emily Holleman
The Creation of Eve by Lynn Cullen