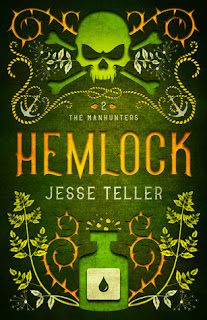 Hemlock brings us back to the world of Perilisc in the second installment of Jesse Teller's Manhunters series. Much like with the first book, Song, I had a great time reading this book and found myself captivated by characters and stories portrayed throughout the story. It's definitely helpful to have read the first book in this series, but I almost think that you could read this one as a standalone without finding yourself too lost.

The world-building is just as strong as the first book. I love how well-developed this world is and how obvious it is that Teller has put so much thought and passion into it. There are so many fantastical elements littered through this world, from creatures to characters to locations, all of which come together to make a great setting.

One of the strengths of this series so far, to me, has been the characters and character development. Rayph is our main character, and I really loved the journey that he had to take in this book. It felt a bit more serious and he seemed to have to deal with more difficult dilemmas--moral and otherwise--than he did in the first book. I felt that Teller did a great job in not only maintaining Rayph's strong character, but also with adding more depth to him.

Another character that I liked in this book was a new addition known as Aaron the Marked. He is a very intense warrior figure who brought so much to the story in such a great way. Although he and Rayph are quite different, I felt that they acted as great foils for one another and added a great level of balance. I like how Aaron was more concerned with being able to serve the king than he ever was for himself. He's also a fantastic fighter and I enjoyed his battle scenes.There were also few characters from the first book that were missing that was a bit disappointing, but I still really enjoyed all of the characters in this book and enjoyed it juts as much as Song.

Hemlock is a dark, gritty book with a lot of violence. Teller describes battles and fights extremely well, but also in a very detailed manner, so if you don't really like that sort of thing then just keep that in mind when picking up this book.

The issues I had with this book were pretty small and mainly centered around the writing. I felt that the dialogue was somewhat awkward and inconsistent at various times. This wasn't an overwhelming issue, but it did bother me occasionally. This is also an incredibly fast-paced story that doesn't ever really let up, so it's easy to stay hooked on the events.

Overall, I've given Hemlock four stars! This was another great installment to the series and I look forward to reading more from Jesse Teller.

*I received an ARC of Hemlock in exchange for an honest review. This has no effect on my rating.*


I am also an Amazon affiliate, so if you'd prefer to shop through Amazon, just click the banner on the upper right hand side of my blog! (above the 'Follow by email' box, you may need to pause adblock to see it!)
You might also like:
Song by Jesse Teller
Scourge by Gail Z. Martin
More than Monsters by J.M. Riou
Merchants and Maji by William C. Tracy
Posted by Jordan @ForeverLostinLiterature at 7:09 AM