House of Names by Colm Tóibín

*House of Names is now available!* 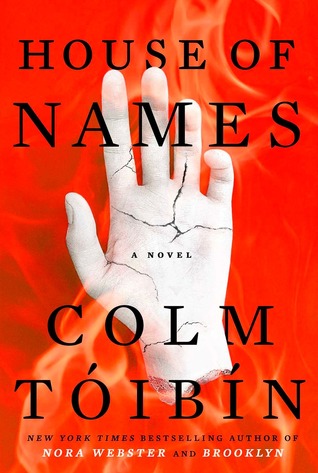 *I received an ARC of House of Names courtesy of NetGalley and McClelland & Stewart in exchange for an honest review.*

For having the title House of Names, this book had very little names in it. And that basically sums up my feelings of this book: full of expectations that just aren't met.

House of Names started off with a bang, as I was incredibly impressed with Tóibín's gorgeous writing. I even remember remarking to someone that I was so excited to continue this book because I just had a feeling that it was going to be amazing after I finished the first few pages. Maybe I jinxed it?

House of Names is a story inspired by the myth of Clytemnestra and Agamemnon, in which Agamemnon sacrifices their daughter Iphigenia, in order to ensure victory in war. Needless to say, Clytemnestra is not pleased. I had heard so many great things about Tóibín's writing, and everything about this book called out to me - I mean, I love my Greek myths. There were many promising aspects of this story, but a majority of this book just fell flat for me.

I'm not sure what made Tóibín take the turns he did in writing this story. What began as a vibrant, deeply emotional and captivating story somehow turned into a cold, detached, and overall uninteresting tale with characters that I could not seem care to care an ounce for.  Clytemnestra began as an extremely three-dimensional sympathetic, strong character, but somehow devolved into an uninteresting two-dimensional figure that seemed to merely be used a plot device. I also don't completely understand how she turned from distraught mother into evil villain - none of it seemed to flow in an understandable manner.

Then there's Orestes, Clytemnestra and Agamemnon's only son. Almost immediately after beginning Orestes' first POV chapter, I was bored. He had such little personality and hardly ever seemed to think for himself, instead deferring to his friend Leander and his sister, Electra. I just wish I had been able to care a little bit about one of the characters, but I just couldn't.

One other area that truly bothered me was how poorly rooted this story seemed to be in Ancient Greece. There was almost no mention of Ancient Greek lands, peoples, politics - anything. If I hadn't known it was an Ancient Greek story, then I might not have even realized most of the time that this was set in that time period.

Overall, I ended up giving House of Names two-and-a-half stars. I really debated giving it three, but based on how much I struggled to get through it, the small bursts of lovely writing just couldn't make up for it.

You might also like:
For the Most Beautiful by Emily Hauser
Helen of Troy by Margaret George
Cleopatra's Shadow by Emily Holleman
Ithaca by Patrick Dillon
Posted by Jordan @ForeverLostinLiterature at 8:01 AM