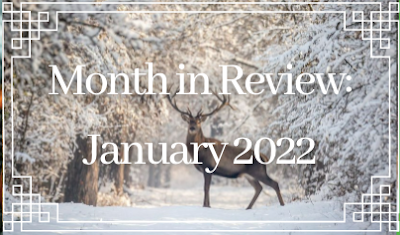 So... was January a super long and busy month for anyone else, or was it just me?

In reading news, I think I've moved past a lot of my major reading struggles that had been plaguing me for the past couple months, so that feels pretty good. I still find myself struggling with focus a bit at times, but overall we're doing well–and I read some fantastic books in January! I re-read The Shadow of What Was Lost, one of my favorite fantasy trilogies, to kick off the year and I think that was a great choice. I also read and loved A River Enchanted, Hunting by Stars, and Dirt King! I've got some fun things planned for the blog coming up (including some interviews, hopefully!), so I'm excited for February. It's a busy month!

In dog news (there's nothing new to tell about my life, so I'm just going to talk about the dog), our new furry family member is doing leagues better and we are so relieved. We finally got to do some treatment for one of his rare parasites, heterobilharzia, now that he's feeling better, and we will test again in a month to see if it's still there or not (fingers crossed, this one is a tough guy to kill apparently!). He is also in the midst of his second of four months of heartworm treatment, and I'm pretty nervous about the next two months since the treatment gets a bit more intense, but we'll just try to take it one day at a time. On a lighter note, we did one of those dog DNA tests for him and got our results (I'll post them below in case you find it half as fun as I do)! 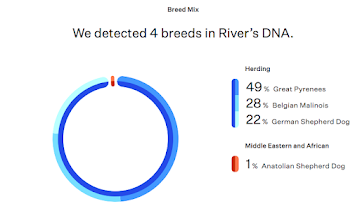 I know these tests can sometimes be a bit unreliable, but this feels completely accurate. The rescue had him listed as a Great Pyrenees mix, so we aren't too surprised (although we didn't realize he'd be half Pyrenees). We can definitely see that Pyrenees attitude while trying to train him... he's quite stubborn. He also has a lot of behaviors and looks that made me think German Shepherd, so I'm not too surprised about that, either, although I didn't expect the Malinois. I don't think we anticipated having such a high energy working breed dog, but, well, here we are! I guess we have our work cut out for us, haha. I also love Anatolian Shepherds, so even though it's only 1% I think that's pretty fun (anyone else think of them as the cheetah dog? Just me?). 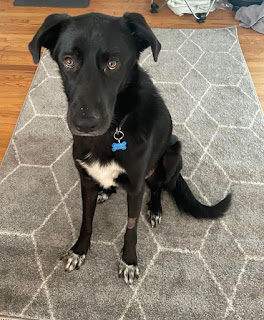 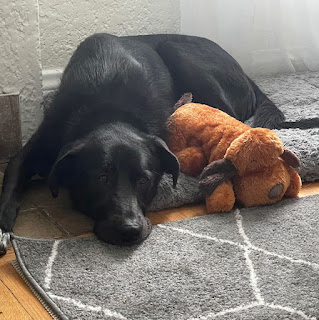 Don't be fooled by these faces or you'll be wrapped around his fingers (paws?) in no time like us. And he has no idea that he's 75 pounds and can't do the things a 40 pound dog can.
Well, I'll stop the wrap-up here before it gets out of hand once again. How was your month? Be sure to let me know in the comments about anything notable that happened, or what books you read and loved/hated/etc.!
# books read: 12

The Starless Crown by James Collins
Source: Publisher | Format: Physical ARC
I really want to read this, but it just wasn't working for me and I opted to put it down rather than force my way through it. Maybe another time!

Engines of Empire (The Age of Uprising #1) by R.S. Ford
Midnight in Everwood by M.A. Kuzniar
Cold the Night, Fast the Wolves by Meg Long
Road of Bones by Christopher Golden
Shapeshifting by Michelle Ross
The Violence by Delilah S. Dawson

Top Five/Ten Tuesday:
Recent Additions to My Library!
New-To-Me Authors from 2021
Can't-Wait Wednesday:
1/5: Dead Silence by S.A. Barnes, The Haunting of Las Lagrimas by W.M. Cleese, & The Great Witch of Brittany by Louisa Morgan
1/12: The School of Mirrors by Eva Stachniak, A River Enchanted by Rebecca Ross, & Last Exit by Max Gladstone
1/19: Age of Ash by Daniel Abraham, Daughters of a Dead Empire by Carolyn Tara O'Neil, & A Lullaby for Witches by Hester Fox
1/26: The Girl Who Fell Beneath the Sea by Grace Axie Oh & Paradox Hotel by Rob Hart
The Friday Face-Off:
White
Pre-1975 Sci-Fi
Space Murder Mystery